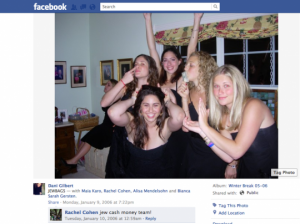 Congresswoman Debbie Wasserman Schultz‘s Jewish liaison Danielle “Dani” Gilbert apologized late Thursday for posting an anti-Semitic slur on Facebook. “I apologize for any harm postings on my Facebook page made years ago may have caused anyone. I meant no offense.”

The Washington Free Beacon had publicized a controversial picture posted to her Facebook account in which Gilbert refers to herself and her friends as “Jewbags” and a friend refers to them as the “Jew cash money team.” The photo quickly went viral, much to the chagrin of Schultz’s political team.

“Danni (sic) has excelled in her role handling Jewish issues for the Chair in her Congressional office and was brought on here part time to do outreach to the Jewish Community,” DNC spokesman Brad Woodhouse lamented to Politico’s Glenn Thrush. “Like many in the age of social media, she had things posted on her Facebook page that she now regrets and which she has apologized for. Her employment both in the Chair’s Congressional office and at the DNC is a testament to her knowledge and professionalism and nothing more – and no smear driven by the right wing noise machine is going to impact her status as a trusted member of this team.”

BuzzFeed reports that Gilbert was hired despite multiple “heated objections” from many people affiliated with the DNC and even from Obama campaign officials: