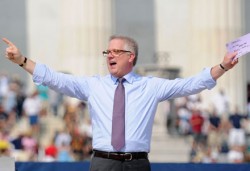 WaPo‘s Dana Milbank is out this week with a new book on Glenn Beck titled ‘Tears of a Clown: Glenn Beck and the Tea Bagging of America.’ An excerpt running on the Huffington Post today has been making the rounds; in it Milbank asserts that much of the time Beck is speaking in coded language to the Mormon population in America. The evidence is hanging by a thread, as it were.

The Constitution is hanging by a thread. Most Americans would have heard this as just another bit of overblown commentary and thought nothing more of it. But to those familiar with the White Horse Prophecy, it was an unmistakable signal. The phrase is often attributed to the Prophet Joseph Smith, founder of the Church of Jesus Christ of Latter-day Saints, or Mormon Church. Smith is believed to have said in 1840 that when the Constitution hangs by a thread, elders of the Mormon Church will step in — on the proverbial white horse — to save the country.

And all this time I thought Beck was just speaking in plain old apocalyptic language! Who knew. Also, why does it matter? Is anyone actually worried that the Mormon population (1.4% of the entire population) is going to rise up and overthrow the country? Probably not. Then again, as Milbank points out, many Christians “malign [Mormomism] as a cult” so perhaps this revelation is supposed to make all his non-Mormon Christian viewers — who presumably were not previously aware of the secret code — nervous, or resentful, or both. There’s more.

But there is a Beckian twist in his version of the prophecy. Unlike the church leaders’ versions, Beck’s vision carries the possibility of a bloody end. On the night of Feb. 24, 2009, Beck outlined this prospect for his viewers. People who “don’t trust the government,” he said, would “see the government as violating the Constitution, and they will see themselves as defenders of the Constitution. Not a good mix. Then they take matters into their own hands.”

As it turned out, taking “matters into their own hands” ended up being the 8/28 rally where a few hundred thousand mostly white, mostly middle-aged, generally very tame people wearing Restoring Honor t-shirts showed up on the National Mall in August to listen to Beck speak in a language I would describe less as a “secret Mormon code” than a combination of the 12 steps meets Aaron Sorkin’s West Wing meets Revelations. But maybe I was wearing the wrong decoder ring.