Bob Woodward: ‘Obama-Clinton’ Ticket Is ‘On The Table’ For 2012 Presidential Run 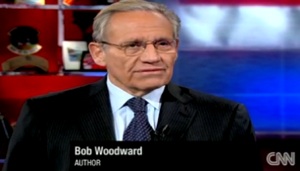 Well in some respects, this isn’t that predictable. Author Bob Woodward was promoting his new book Obama’s War with CNN’s John King today and was asked about the political conversations surrounding the “real possibility” that Secretary of State Hillary Clinton could “switch jobs” with Vice President Joe Biden. According to Woodward, its not as far fetched as one might have previously thought.

“It’s on the table,” veteran Washington Post reporter Bob Woodward told CNN’s John King in an interview for John King, USA to air Tuesday at 7 p.m. ET. “Some of Hillary Clinton’s advisers see it as a real possibility in 2012.”

The scenario – whereby Vice President Joe Biden and Secretary of State Hillary Clinton would switch positions – has been bandied about by political observers for months, seen by some as a potentially savvy strategy to gin up excitement among what appears to be a depressed Democratic base.

But it’s never been clear if the idea has been actually discussed in the White House, until now.

“President Obama needs some of the women, Latinos, retirees that she did so well with during the [2008] primaries and, so they switch jobs, not out of the question, and the other interesting question is, Hillary Clinton could run in her own right in 2016 and be younger than Ronald Reagan when he was elected president.”

There has already been much sturm und drang over a potential Hillary presidential run in 2012, and this would ostensibly short-circuit that plan, though Woodward does suggest that Hillary has not yet ruled out a potential run in 2016. See for your self in the clip below.