Rick Sanchez - Interview | I Got Greedy - Mad - In Trouble
Q&A

Rick Sanchez Tells Mediaite: “I Got Greedy And I Got Mad And I Got In Trouble” 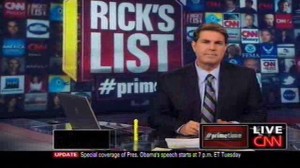 Rick Sanchez came to New York City today for a live interview on Good Morning America and a radio interview on WABC. Before he left for Atlanta, I talked to Sanchez at his hotel, overlooking his former employer, CNN.

Mediaite: Let’s start with Thursday. You go on the radio show. It was after Rick’s List, that day?

Sanchez: Literally two minutes. After Rick’s List, there’s a studio audience that comes in, they have this thing CNN has its called “Rick After The Tour” and they come in and they get my autograph and they take a picture with me and its very nice. As soon as I was done with that I headed downstairs and right into a studio to do the interview.

Mediaite: So you do the interview Thursday. Did you think, before anything came out, what kind of reaction could come from it?

Sanchez: Yeah, I did. I even knew it as I was into it. But I was too impetuous to control myself. I should have been a little more careful. But yeah I kind of knew. I even told my wife when I got home, I said, ‘I just did an interview and I kind of went off on some things I shouldn’t have said.’ So yeah, I knew.

“ I don’t like what we’re going through in this country right now. If that’s where the business is going, I’m not sure I want to be a part of the business.”

Mediaite: So Friday, we wrote our story around 9am, emailed CNN about it, and I don’t know if that was the first time they had seen it or heard about it, but what was Friday like for you?

Sanchez: Oh it was difficult. I knew what you knew, that there was a whole lot of coming down the pike. All my wife and I could do was wait and see what would eventually come of it. We learned the news pretty much the same time everybody else did, when they put out a statement. Look, they have done what they needed to do. They have basically been good to me. They didn’t screw up, I screwed up. The onus is on me. My loyalty to them is not gone because they gave me six good years. And if there’s an opportunity to get back together in the future, that would be great. I made a mistake, I said some things I shouldn’t have, I insulted people. And they deserve a direct apology from me.

Mediaite: The Daily Show, Jon Stewart comments were probably the ones that got the most attention, but there were also things in there about CNN executives. Do you think that was the straw that broke the camels back?

Sanchez: (Those comments) had nothing to do with CNN, but it does have to do with the state of the media right now. And there’s several things that are working right now that bother me as a person in the media. A) we’ve got one camp that is nothing but vitriol and ideologically driven. That’s not good. We’ve got another side of the media that’s nothing but milquetoast. They do nothing but want to read teleprompters and ask whatever questions are handed to them and go home. And I write about this in my book. That in and of itself has kind of made me crazy over the last several years. I try to do a different kind of newscast, it’s very transparent, it involves social media, I ad-lib more than I read. I’m very involved. I write, I produce I gather my team at 7 in the morning. It’s very different than the way the media has been. The other thing is I look at the landscape of the media and I don’t see an African American, a Hispanic, an Asian anywhere near the prime time area of programming. All the top anchors are not in any way reflective of the minorities in the United States. And I’ll be honest, that sticks in my craw. I feel sometimes like, ‘gosh I’m so close.’ And then I put the Jon Stewart with that, always making fun of me, and I thought, ‘see I’m not getting the opportunity and damnit Jon Stewart that institutional media elite guy’ is keeping me down.’ And I lashed out, and I was wrong.