Ride The Cain Train: Comedian Tim Heidecker Releases Charity Album About Herman Cain Because Why Not 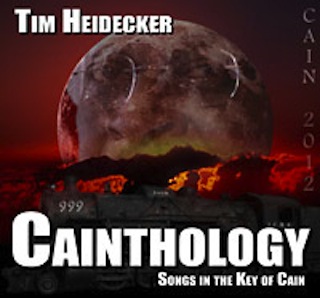 A few weeks ago when The Greatest Campaign Ad Ever Made by Man or God™ was unleashed upon the world by Herman Cain, every single blogger worth his weight in snark (including this one) made the note that it looked like something dreamed up by surrealist comedians Tim and Eric. Well, as coincidence would have it, one half of that duo, Tim Heidecker, was becoming oddly fixated on Cain and the strange (or evil) comedic possibilities he held. How fixated was Heidecker? Well, he’s now released a full album of songs dedicated to the man.

Heidecker, who already had a musical career going in addition to his comedy, clearly felt a kinship with his fellow musical multi-hyphenate Cain. So, he began releasing strange campaign songs for the candidate (who he calls “Hermun” for some reason) on his Tumblr. He even made a video for one of them, “Cain Train,” which quickly went viral:

Today Heidecker announced that he’s collected all the songs (as well as a few new ones) on an album. Entitled “Cainthology: Songs In The Key Of Cain,” the album is being sold online with all proceeds going to The VIP Medical Clinics for Abused Children and Community Mental Health Center.

So check it out. The tracks are great (our favorite is “Cain Train Baby”) and are perfect for listening to while hanging out, campaigning, or just driving around in your car.

Although you should probably make sure you’re not in a car with Cain.

…because he’s a married man is all.