Ron Reagan: My Father Had More In Common With Obama Than Sarah Palin 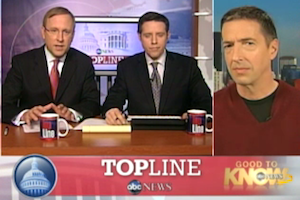 Just as a good Ronald Reagan quote will always inspire warmth in the heart of conservatives, a quote from his younger son, Ron Reagan, is sure to piss them off. The folks at ABC’s webcast Top Line set him up from the beginning of their interview yesterday, leading off with the question of whether his father was more like Barack Obama or Sarah Palin. From the moment Reagan started his response with “Just on the basis of intelligence . . .” you knew this would be another quotable interview.

Sure enough, Reagan, who’s been in the news plenty thanks to the 100th anniversary of his father’s birth as well as the release of his controversial book, had no hesitation in choosing Obama. He went as far as to say that he didn’t think his father had anything in common with the former Governor who spoke at his father’s anniversary event.

But that wasn’t the end of the interview. From ABC News:

“’It’s not surprising that Republicans revere him as an icon and want to use him in that way. He’s almost a fetish object, as I’ve said, over on the right,’ Reagan told us. ‘True enough, he was a lower-taxes-and-small-government kind of guy. But of course the top marginal rate when he was in office was 50 percent, so he might be pretty happy with things the way they are now. I don’t know though — I can’t speak for him. A lot of other people do like to speak for him though but I think it’s a mistake. Many of them have never even met him, of course.’

He said he’s not sure what the tea party movement would make of his father, were he active in politics today.

‘Of course my father cut taxes when he was in office, but he also raised taxes as well when he was governor of California. He signed one of the most liberal abortion laws in the country and offered amnesty to illegal immigrants as well. That probably wouldn’t sit too well with the tea party of today. But again, those were different times.’”

Man, it must be tough having someone with the same name as your personal hero constantly bringing you down. I suppose this is a feeling I’ll never understand until the day a dude named Joseph P. Batman tells me I’m stupid.

Check out the clip from Top Line below: