Rothman: The 30-Year Democratic Campaign to Be the Pro-Troop Party Implodes

Rothman: The 30-Year Democratic Campaign to Be the Pro-Troop Party Implodes 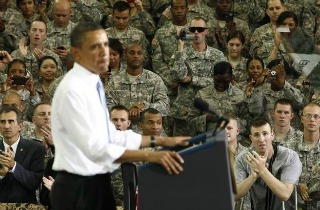 For over a generation, the Democratic Party has aggressively fought the often unfair characterization of their party as one that is not only soft on national security issues but also deeply suspicious of the military. Few expected President Barack Obama to do much to repair that image when he took office, but he surprised by presiding over a spectacular reversal of political fortune.

Not long ago, pundits and political professionals alike marveled at how Obama wrested voters’ trust on national security issues away from Republicans. In the space of just over a month, however, the Obama White House has overseen the destruction of that re-branding effort.

The notion that Democratic politicians are hostile to both the troops and their mission has dogged that party since the Vietnam War. It is an image that every Democratic presidential nominee has combated since Walter Mondale lost 49 states campaigning on reduced militarism and higher taxes. Fighting the ghosts of pacifism led Michael Dukakis to strap on a tanker helmet, forced Bill Clinton and his allies in the press to defend his patriotism ad nauseam, and put John Kerry on defense on military issues throughout the 2004 campaign.

Obama, an unapologetically professorial figure, was not elected to alter his party’s image on military issues. But his presidency’s initial focus on veterans’ issues, the surge in Afghanistan, the withdrawal from Iraq, and a daring and successful raid that resulted in the death of Osama bin Laden upended conventional wisdom.

Even prior to the bin Laden raid, Obama drew highest marks from voters on his handling of American foreign policy. By November, 2012, polls began to show that Obama’s conduct of military affairs had reframed voters’ perceptions of his party. “Veterans and active duty military are more likely to split their votes rather than acting as a reliably Republican voting bloc, as occurred in other recent past elections,” wrote Nikolas Gvosdev in National Interest. Obama had “broken the GOP’s decades-old advantage on foreign affairs,” The Daily Beast’s Peter Beinart crowed.

Those gains, as it turns out, were quite fragile. The White House’s callous and tone-deaf handling of the dual scandals involving military service personnel — the mismanagement at the Department of Veterans’ Affairs and the raw deal surrounding the release of five dangerous Taliban detainees in exchange for an alleged deserter – may have undone both Obama’s work and that of his Democratic predecessors.

The issues at the VA predated Obama’s presidency, but when the scandal involving the falsification of wait times broke, the president did nothing. When it was revealed that his administration was informed of the increasing problems at the VA in 2008, Obama still did nothing. The ghastly claim that some veterans had died or suffered serious complications as the result of their inability to receive the care they were owed moved Obama only to defend the VA and his Cabinet secretary, Gen. Eric Shinseki. A situation that demanded alacrity and clarity of purpose was met with dithering and political posturing from the White House.

When the outcry over the scandal became so great that Obama was forced to address it publically, he assured that patience was what the moment demanded. Within days, as a bipartisan demand for action from the White House grew and following the completion of a preliminary investigation into just one of the scores of hospitals accused of creating fraudulent waiting lists, Obama jettisoned Shinseki.

His administration has said virtually nothing about the VA scandal since Shinseki’s resignation because a new veteran-related episode has been dominating the headlines. In what the White House surely hoped would be the feel-good story of the summer, Obama announced that the last American POW in Afghanistan had been recovered as the result of a deal with the Taliban. Flanked by that soldier’s parents in the Rose Garden, the president announced that a major milestone in America’s longest war was finally behind us.

Then people started asking questions. Within days, the positive elements of the story involving the recovery of Sgt. Bowe Bergdahl were swamped by questions about the prudence of the prisoner swap. Lawmakers raised concerns about the president ignoring the law when they released five Taliban commanders in exchange for Bergdahl – an act for which the White House subsequently apologized. Administration officials who had touted Bergdahl’s service record, including National Security Advisor Susan Rice, were contradicted by those with whom the solider served.

No less than six of Bergdahl’s fellow servicemen came out and alleged that not only had the former Taliban prisoner deserted his post, but that he did so intentionally and with the aim of joining forces with the enemy. They balked at the administration framing Bergdahl as a hero, insisting that six “real heroes” died in the effort to recover him. Two of Bergdahl’s former comrades alleged that, after he fell into captivity, attacks against American forces became more effective, suggesting that insurgents had acquired insider information about American military tactics.

These soldiers did not imply that Bergdahl should have been left behind. They did not suggest that Bergdahl should be convicted of offenses without facing a military trial. They merely objected to his being recast as a hero by their commander-in-chief. Faced with this backlash from American veterans who possess what they claim is firsthand knowledge of Bergdahl’s betrayal, the White House has responded in the most petulant way imaginable: they attacked these soldiers’ motives.

“I’ve had a few aides describe it to me as ‘we didn’t know that they were going to Swift Boat Bergdahl’,” NBC News Chief White House correspondent Chuck Todd reported on Wednesday. “Of course, that’s a reference to that political fight back in 2004 over John Kerry’s military service which became so controversial in that campaign. So there’s some fighting words there.”

Indeed they are. The pointed reference to the 2004 Kerry campaign, when the former Democratic nominee’s former military colleagues – some of whom were among the most decorated living servicemen at the time — came out publically and questioned Kerry’s ability to run on his service record, reflects a great deal of disdain for those military men blowing the whistle on Bergdahl. The “swift boat” attack was deadly effective, and the sting of that wound lingers in the memories of progressive activists and, apparently, members of the administration.

But those anonymous quotes to Chuck Todd are merely one front in the campaign to discredit the dissenting soldiers. “Military officials” provided the New York Times with background suggesting that the claims that attacks on U.S. troops became more deadly after Bergdahl went missing cannot be verified. State Department spokeswoman Marie Harf told reporters that these troops’ recollections about Bergdahl’s disappearance, buttressed by a wealth of independent reporting, were not to be trusted. The administration, it seems, is doing its best to protect the narrative that Bergdahl is what they need him to be – the last prisoner of war – even if that means smearing the reputations of some disagreeable veterans in the process.

It is reasonable to assume that the past several weeks have undone much of the progress this administration made in re-framing the Democratic Party as a pro-troop party. The summer’s twin outrages, one centered on the government’s unsympathetic disregard for veterans left behind by the system and the other involving the administration’s apparent willingness to attack their character when necessary, may have set that perennial Democratic mission back years.