Rush Limbaugh: ‘As a Citizen, I Was Embarrassed’ by the VP Debate 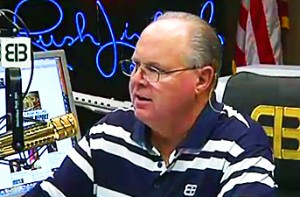 Rush Limbaugh went on a massive rant on his radio show today about how “embarrassed” he was by the VP debate last night.

He called Tim Kaine an “embarrassment” and an “abomination” and said he was so bad, “even the drive-by Media is embarrassed of Tim Kaine and realizes that he blew it.”

And he believes that Kaine’s performance exemplified liberal fears about the election:

Limbaugh thinks that both Democrats and “their hacks disguised as journalists” are contributing to the “gradual decline in the overall intellect, in the seriousness of the things that we are dealing with, the issues, the challenges that we as Americans face.”