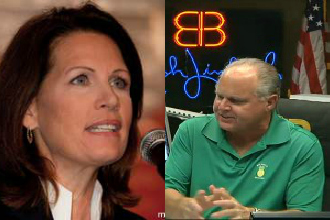 Last month, Rep. Bachmann told a radio host that she believed “there has been deep penetration in the halls of our United States government by the Muslim Brotherhood.” When fellow lawmaker Rep. Keith Ellison (D-MN) requested clarification, the congresswoman and several other Republicans submitted a letter in which she expressed concern about Clinton aide Huma Abedin’s financial connection to the Brotherhood.

“Isn’t this what congressmen on the Intelligence Committee ought to be asking?” Limbaugh asked in defense of Bachmann et al. “If there are national security violations or problems involved in a security clearance for somebody with such close ties to avowed enemies?”

– RELATED: Huma Abedin Gets Police Security After Being Threatened

Limbaugh then scolded Sen. McCain for being the one to call attention to the letters, noting that Rep. Bachmann “did not want to go public” with the allegations. The Arizona lawmaker took to the Senate floor last week to call her allegations “unfounded and unwarranted.”

“She’s doing her constitutional duty,” Limbaugh continued. “And now the Democrats are in Minnesota seeing if Bachmann is vulnerable because of what McCain has done.”

“It’s not good,” he concluded.

Check out the audio below, via Daily Rushbo: