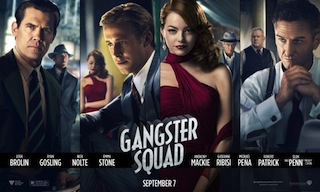 In the rush of news following the horrific shooting in Colorado last week, one of the more bitterly ironic tidbits was the fact that the screening during which the shooting took place was preceded by a trailer that featured a movie theater being shot up. The trailer for the upcoming period crime film Gangster Squad includes a scene in which a bunch of mobsters shoot machine guns through a film screen into the theater’s screaming audience. Warner Bros. quickly removed the trailer from theaters and has even made it difficult to find online. However, they’re apparently not stopping there. Variety is reporting that the entire sequence may be removed from the film and reshot.

What makes the whole thing more notable is that the shootout is reportedly part of the big climax of the film.

“And the studio moved swiftly Friday to pull from exhibs and online outlets the trailer for ‘Gangster Squad,’ a period drama that featured a scene in which agents spray machine-gun fire into a crowded movie theater from behind the screen. Given the eerie association created by the Aurora shootings, Warner Bros. has since decided to remove the scene from the film, which opens Sept. 7, and is putting reshoot plans into motion, a source with knowledge of the situation told Variety. Warner Bros. would not comment.”

These kinds of things do happen from time to time. After 9/11, a trailer for the original Spider-Man film was shelved because it featured a giant web between the Twin Towers. And the Dave Barry adaptation Big Trouble, which was supposed to be released on September 21st, 2001, was held and then given a tiny release the next year because its entire third act revolved around bumbling criminals bringing a nuclear bomb on a plane.

These things do happen. But should they?

There’s a big difference between holding a movie for a few months and drastically altering a piece of art because of something a killer did.

I know nothing about Gangster Squad. I don’t know if this scene in question is actually an integral part of the story as some have theorized. However, I do know that fate has forever connected it unfairly to this attack. And I do know that taking this scene out, a scene that might be inextricably woven into the story, won’t change that fact.

It might, though, hurt the integrity of a film that has nothing to do with the deranged young man in Colorado.