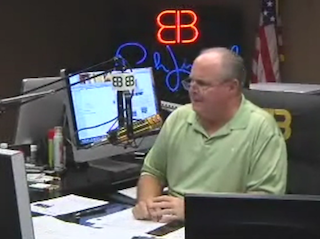 Rush Limbaugh’s latest proof that this whole “killing Osama bin Laden” thing is just another ploy to make Barack Obama appear presidential is two articles; one from the Associated Press and the other from the New York Times. The AP piece describes how Al Qaeda may have actually been split into two factions with Bin Laden only running one. What a wuss! However, the New York Times wants us to believe that Bin Laden “played a direct role for years in plotting terror attacks from his hide-out in Abbottabad.” Clearly the liberal newspaper is only exaggerating how dangerous Bin Laden was to make Obama seem like more of a tough guy. For shame.

Limbaugh’s argument was that the AP article actually follows what the administration had been saying for the past few years.

“My friends, this is hilarious. When Obama couldn’t find Osama, even though he promised he would, we were told Osama was of no consequence whatsoever. This regime, they cannot keep their lies straight. They can’t keep their lies straight. We were told for the last three or four years, ‘Hey, y’know, dialysis. The guy’s a shell of his former self. He’s not even operationally in control.’ We’ve heard this over and over again from this bunch. Now, the New York Times, in an effort to build up the strongest guy in the Situation Room, Barack Obama, in an effort to build him up, ‘Guess what, folks. Usama bin Laden has been at the helm this whole time.’ Yes, Osama has to be built up, has to be amplified, has to be blown up, has to be made the Big Kahuna is order to make it seem like Obama has pulled off a major coup here.”

Is Osama bin Laden really someone that needs to be amplified? God, if he’s no big deal, then I feel bad for all the young terrorists just starting out. What do you have to do to impress Rush Limbaugh? Of course, one could say that the attack on Bin Laden wasn’t purely about protecting America but also, as 99% of the statements have claimed, about “justice” or whatever but, sure, lets go with this. Bin Laden was just a weakling and the administration had to send secret messages to New York so that the Times could use their liberal decoder rings and get their mission to pretend he was actually scary.

In that case, how dare they! It’s terrible for someone in the media to force their version of a story down people’s throats repeatedly so as to build up their own version of events. That’s just terrible.

Every day I feel worse and worse about misunderstanding Limbaugh’s first reaction to the Bin Laden news. I’m starting to get the feeling that, ever since people started thinking he actually liked something the White House did, Rush Limbaugh’s been working way too hard to save his rep.