Kumail Nanjiani is a Pakistani-American comedian who stars in the hit HBO show Silicon Valley. Kunal Nayyar is a British-Indian actor who stars in the hit CBS show The Big Bang Theory. And in a review of the HBO show, mostly focused on its gender politics and issues with female representation, writer Sonia Saraiya made this rather awkward flub: 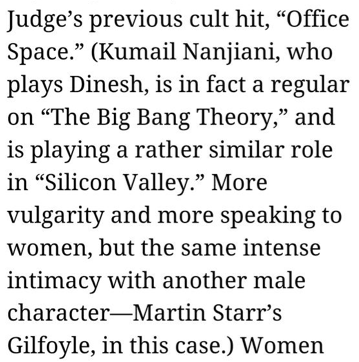 Oooooh, @salon. Guys. Admit you just massively fucked up, laugh it off, and move on. And accept the shit Twitter's about to send your way

And take a bow, @salon. You just out-Onion'ed @TheOnion.

Dear @salon: Use the headline "Wrong Brown Guy" in the thinkpiece. OWN IT. We all fuck up. Not trying to be mean, seriously.

@kumailn @Salon @kunalnayyar That's so insulting! Hey while I have you, will there be a "Third Best Marigold Hotel?" You were BRILLIANT!

@kumailn @Salon @kunalnayyar The Salon writer is still not sure if you were in 'Short Circuit'.

@kumailn how did they confuse big bang theory and parks and rec??

@kumailn @Salon @kunalnayyar This offends me on showbiz ignorance grounds. You can't be a regular on both shows. Sony & WB are too far away

@kumailn I prefer the work you do in the Harold & Kumar movies to your Big Bang stuff, but I suppose I'm biased.

@kumailn @Salon "Zup y'all. In a recent review, we implied that two people who don't look or sound that similar are THE SAME PERSON."

.@salon I can't believe you thought this guy was @kumailn. Not cool! pic.twitter.com/0W0Poi1Lv3

Salon eventually got wind of all this, added a small correction, and apologized:

I made a huge mistake in a review I wrote and I am very sorry to have done so. It should be updated.

My sincerest apologies to @kunalnayyar and @kumailn, who are NOT the same person.

I'm so sorry to @kumailn for conflating him with another Indian actor. It was a facile, easy-to-check error, and I should know better.

Sincere apologies to @kumailn for tonight’s embarrassing error. We screwed up. The story has been corrected. http://t.co/qJXQDjTicS

Nanjiani subsequently asked people not to beat up on Salon or Saraiya:

Please don't tweet at the author of that article. I'm sure she feels horrible as it is.