Salon Writer Defends ‘Inner N*gger’ Article: ‘Not The First To Use This Term, Nor Will I Be The Last’ 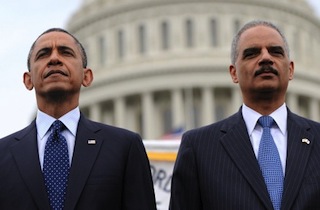 Benjamin was referring to Eric Holder’s full-throated response to George Zimmerman’s acquittal, in which the Attorney General has called for a thorough review of Stand Your Ground laws and a potential civil rights investigation into the shooting of Trayvon Martin. Benjamin contrasted this forceful reaction to Obama’s “professorial” remarks, in which he “refuse[d] to say anything insightful or profound about the acquittal,” and asked if Holder were functioning as Obama’s spokesman on the issue of race, addressing the topic with a vehemence that Obama’s title precludes.

The article elicited a wave of criticism, over Benjamin’s argument, his word choice, and the lack of diversity in online media in general. On Saturday morning, he responded, reminding readers of his respect for the president—”my autographed copy of Dreams from My Father: A Story of Race and Inheritance is one of my most cherished possessions,” he wrote—but defending his portrayal of Holder as Obama’s more pugnacious, outspoken double.

My Salon article asks to what extent the president covers his race-based thoughts, and whether Mr. Holder is a surrogate, or an active proponent, of the president’s potentially more controversial, but productive, viewpoints. Does Mr. Holder provide the president “cover” for the president to express his opinions on this volatile topic, but in softer terms? Eric Holder has been much more vocal and active on issues of race during this administration; I do not “blame” anyone for this, but I do point it out.

Benjamin also reaffirmed his use of the word “nigger”:

[…] I am not the first to use this term in public discussion, nor will I be the last. The term is in wide circulation in the streets, in private homes, in popular culture, in black-generated rap music, and in thoughtful scholarship, most notably in Harvard Law Professor Randall Kennedy’s exceptional tome, “Nigger: The Strange Career of a Troublesome Word.” My use of the word isn’t haphazard or gratuitous. Language is central to race. Language has been central to Martin’s tragic death and to Zimmerman’s acquittal. Language is central to our implicit and explicit racial biases. As a writer, evaluating speeches, by two capable and eloquent public servants, I use the word “nigger” with deep understanding of its long, complicated existence.