Hannity Blasts Obama’s Claim That ‘Trayvon Could’ve Been Me’: Both ‘Smoked Pot, Did A Little Blow’
audio

Hannity Blasts Obama’s Claim That ‘Trayvon Could’ve Been Me’: Both ‘Smoked Pot, Did A Little Blow’ 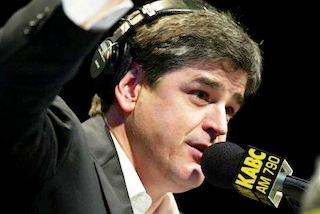 What do Barack Obama and Trayvon Martin really have in common? According to Sean Hannity, it might be their membership in the Choom Gang.

On his radio show Friday afternoon, Hannity accused the president of politicizing the reaction to the George Zimmerman verdict in his speech earlier in the day, and wondered if Obama’s identification with Martin was due to their similar drug pasts.

“Now the president’s saying Trayvon could’ve been me thirty-five years ago,” Hannity said. “This is a particularly helpful comment. Is that the president admitting that—I guess because, what, he was part of the Choom Gang and he smoked pot and he did a little blow? I’m not sure how to interpret that, because we know that Trayvon had been smoking pot that night. I’m not sure what that means.”

Hannity also rolled his radio eyes at Obama’s statement that the “national conversations” about race many have been calling for could end up “stilted and politicized,” noting that it was Obama who often inserted himself into local conflagrations, polarizing reactions in the process.

“The politician who is quick to stick his nose in all this first? ‘The police acted stupidly,'” Hannity said, quoting Obama’s statement following a potential instance of racial profiling between the Cambridge Police and Henry Louis Gates Jr., which ultimately led to a Beer Summit over race relations.