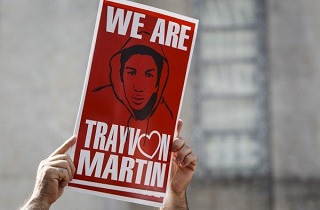 The competition for The Week’s Most Offensive Column About The Killing Of Trayvon Martin is heating up. The Washington Post is rightly being pilloried for publishing a column that suggests George Zimmerman’s pursuit of the unarmed teenager was reasonable, given the victim’s race and attire. But on the same day Richard Cohen explained the black criminal uniform, Salon’s David Sirota co-opted the tragic killing to make points about the drone strike on Anwar al Awlaki, and the NSA’s collection of telephone numbers and call times.

Sirota’s razor-thin premise is summed up in his headline, which declares that “George Zimmerman Killed The Presumption of Innocence,” and its sub-headline, “In an era of drones and NSA excess, the Zimmerman verdict reaffirms that like Trayvon, too many are presumed guilty.”

I don’t know Sirota, but like my friend Matt Lewis, I’m going to assume he meant well, and just wanted to use the hottest current news story to buttress a message in which he strongly believes. There are lots of reasons to dislike drone strikes and NSA surveillance (or, more to the point, the FISA umbrella under which it operates), but whether Sirota intended them to be, or not, the comparisons are offensive. For example:

Remember, in the same year that saw Zimmerman kill Martin, Zimmerman’s president, Barack Obama, extra-judicially executed Anwar al-Awlaki and then his 16-year-old son, without charging either of the two U.S. citizens with a single crime. The two were simply presumed guilty, without any evidence being officially marshaled against them.

The key difference, of course, is that al Awlaki was not an innocent, unarmed teenager. I’ve heard many compelling arguments against drone strikes, and (less compellingly) in favor of granting active terrorists the right to a trial if they were born in Albuquerque, but I haven’t heard anyone suggest that Anwar al Awlaki and Samir Khan, the target of the strike that killed al Awlaki’s son, were innocent.

Likewise, there are compelling reasons to dislike the recent revelations about the National Security Agency’s collection of phone records, but as far as I can tell, none of that has resulted in, or will likely ever result in, a single person winding up dead in the rain. There are things about the drone program and the NSA scandal that are wrong, even unjust, but to conflate them with the killing of Trayvon Martin is to trivialize that tragedy, and to misdirect its consequences:

That said, the Zimmerman Principle is also now becoming more indiscriminate and expanding beyond race, ethnicity and religion. For instance, with its “collect it all” mentality, the National Security Agency presumes all Americans guilty — or at least potentially guilty enough for the government to have probable cause for 24/7 surveillance. Likewise, the Justice Departmentpresumes whistle-blowers guilty and prosecution-worthy, and the Washington establishment presumes the same about journalists who report news that embarrasses the government. Meanwhile, as McClatchy reports, the White House is now encouraging federal employees to presume their co-workers guilty based on “lifestyles, attitudes and behaviors.”

This is exactly the opposite of the “Zimmerman Principle” that Sirota talks about, but that WaPo‘s Richard Cohen so eloquently states. The point is that George Zimmerman didn’t suspect everyone equally, and his exoneration isn’t a threat to all Americans, and we are not all Trayvon Martin. Those of us who can safely wear hoodies should fight hard against the injustice that caused that young man’s tragic death, not co-opt it to fit some other agenda.