“Santa Is In Chelsea!” Amazing Christmas Story From The New York Times 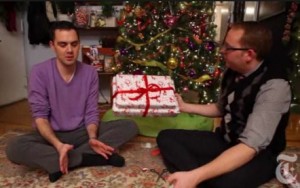 With all the slots on my advent calendar finally open and the sound of furious wrapping coming from behind locked doors in houses all across the planet, it looks like Christmas eve is finally upon us. With that, the New York Times has posted a truly great video about a real life Christmas story that’s more miraculous and heartwarming than half the movies on your TV (no offense, He-Man and She-Ra: A Christmas Special). It tells the true story of a couple of men in New York who suddenly began receiving hundreds of letters at their door from children all across the city and all addressed to Santa Claus himself.

The report, entitled “Miracle on 22nd Street” is about Jim and Dylan, two men living in Chelsea who first began receiving the letters a couple of years ago. At first, it was just a few a year but, this year, the number reached 400. All were for Santa. All were from children. Many hinted at a Christmas fraught with economic problems. The mystery of why the letters were addressed to some random apartment has not been solved.

“They lost interest in finding out just why they were getting all these letters. But I didn’t. I did a bit of sleuthing. I reached out to three people who had sent letters. The first person I called said that she got the address, along with a few others, from a teacher in an English as a Second Language class in the Bronx. The teacher said that if they wrote the address, Santa might write them back. The woman on the phone would not give the teacher’s name or the location of the school. The second phone call led me to a mother who said she got the address on the post office Web site when she typed in Santa. I had her wait on the phone while I tried it and found nothing. I asked her to send me a link and did not hear back from her after a couple of attempts. The third woman said that her daughter got the address at her school, but when I called the school they claimed to know nothing about an address in Chelsea.”

Whatever the reason may be, Jim and Dylan sought to do something about the letters. I don’t want to ruin what happened. Just watch the video below and try not to have a little warming of the heart.