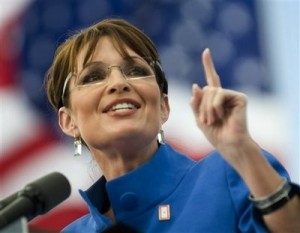 Many have tired of Donald Trump hogging so many headlines as of late, so now it’s time to let that attention-starved potential Republican presidential candidate Sarah Palin get some of her spotlight back. In her latest Facebook post, Palin unleashes a harsh assessment of President Obama’s Libya policy and throws out a few lines that should start to remind people that the bombastic Trump is not the only Republican who is ready to talk tough and who can legitimately bring the fight to Obama.

Palin demands to know from Obama why exactly are we fighting in Libya, suggesting:

“Between you and your advisers the public has been given so many conflicting statements on why we’re intervening in Libya that I apologize if I can’t keep up with the timing and rationale of your murky foreign policy positions. . . . Mr. President, your hesitation and vacillation in the Middle East breed uncertainty. It’s symptomatic of the puzzling way you govern.”

Yet the harshest words come from her perspective that Obama prioritizes campaigning for re-election ahead of leading the country:

“It’s unbelievable to me that you spent last week in campaign mode, gallivanting around the country to start raising the billion dollars for your reelection bid that is still 19 months away ‘while Rome burns.’ . . . As was recently asked: When do you ever just ‘roll up your sleeves, unplug the teleprompter’ and do the job of governing and administrating for which voters hired you? I know, I know, granted you will be even busier very soon. After all, golf season kicks into high gear shortly. NBA and NHL brackets await.”

Now that ladies and gentleman, in my opinion, is an entertaining smackdown. Unfortunately, what is Palin doing wasting this on Facebook?!? Trump is dominating the Republican primary polls precisely because he is fearlessly sharing his criticism of Obama with any television interviewer who will listen. Despite conventional wisdom now suggesting Palin is not interested in running for President as potential candidates like Trump and Congresswoman Michele Bachmann eclipse her in popularity, by writing this post, Palin clearly wants her name to still be in the mix. Republican primary voters are desperate for their potential candidate to not only passionately stand up to Obama, but to also demonstrate they won’t back down from the perceived “Obama-friendly” media. Trump and Bachmann have already cleared this hurdle by engaging the media on various issues. Palin can definitely clear it too, she’s just got to be willing to jump.