Scant Coverage of Attacks in Turkey, Pakistan Underscores Over There vs. Over Here Mentality
Opinion

Scant Coverage of Attacks in Turkey, Pakistan Underscores Over There vs. Over Here Mentality 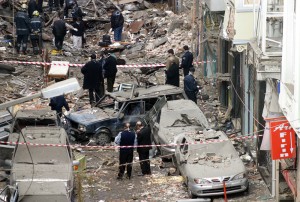 There appears to be an imaginary red line when it comes to allocating airtime and resources around terror attacks across the globe. Geography is somewhat relevant here, but for the sake of this column let’s simplify the red line this way:

And there’s over there.

Over here is what’s commonly known as the West: Western Europe, the U.S., Canada. The West shouldn’t be confused with those belonging to NATO, however, as evidenced by the scant coverage of two terror attacks — one by suicide bomber and another by car bomb — in Turkey this month, which is part of the alliance and a major tourist attraction for Westerners. How major? 42 million people visited Turkey in 2015, placing it as the 6th-most popular tourist destination in the world.

All told, 41 people died in the two aforementioned attacks that occurred in Istanbul and Ankara, respectively. ISIS claimed responsibility for one attack, while the other was claimed by Kurdish separatists. Included among the dead were two Americans.

What’s that you say? This is the first you’ve even heard about these attacks? Well, one occurred on March 19 and the other on March 13. Six terror attacks have happened in Turkey — a free-market economic country — over the past year alone. But despite Americans among a death toll higher than Brussels (41-31 people killed), the coverage was relatively fleeting… here and gone in less than 24 hours and never at the top of any nightly newscast. The reason is simple: Turkey somehow falls in the over there category in the minds on Western media and therefore doesn’t deserve 1/20th the resources allocated to Brussels, which is decidedly over here.

And then there was the horrific Easter attack targeting Christians in Pakistan just yesterday: 70 dead, including 29 children enjoying the holiday in a public park in the provincial capital of Lahore. Pakistani Taliban’s Jamaat-up-Ahrar faction — which once declared its loyalty to ISIS, claimed responsibility and confirmed it was specifically targeting Christians on its most holy holiday.

The amount of news coverage of this horrific attack was again spotty at best upon watching the major outlets yesterday. The reason again is simple: Pakistan is way over there. It doesn’t matter that Christians or children were involved. It doesn’t matter the Pope directly condemned the attack. The thought process by producers and editors and even audiences alike is that these sort of things happen over there all the time, and we’re long-past numbed by it all.

But herein lies the problem: ISIS is increasingly metastasizing from being strictly over there (Syria, Iraq, Libya, Afghanistan) to filtering in over here. More attacks like the ones we saw this month in Turkey and Belgium and Pakistan are sure to follow as long as there’s no shortage of those looking to blow themselves up in airports and cafes and crowded parks. The threat grows each day. As does anxiety and fear: A recent New York Times/CBS survey finds that 79 percents of those Americans polled believe a terrorist attack is somewhat or very likely in the next few months. Seven in 10 consider ISIS to be a major threat to homeland security. That’s an all-time high number.

So for those who believe the fear and anxiety Americans are feeling is the product of cable news hype in a quest for cheap ratings or a campaign tactic by Republicans to tilt the general election the GOP’s way in November, the numbers above clearly indicate this is well beyond conservative or liberal polarization.

Pakistan. Turkey. Brussels. Paris. The varying amounts of airtime dedicated to those events individually is staggering. The total numbers in the death tolls are not. And we haven’t even touched the atrocities happening in Africa — another member of over there — where Boko Haram is as savage and murderous as ISIS. Per The New York Times in November:

Boko Haram, the militant group that has tortured Nigeria and its neighbors for years, was responsible for 6,664 deaths last year (2014), more than any other terrorist group in the world, including the Islamic State, which killed 6,073 people in 2014, according to a report released Wednesday tracking terrorist attacks globally.

Thousands killed in terror attacks at the hands of two groups in increasing in number. And as terror continues to grow and expand across the world, eventually there may be no distinction between what’s here and what’s there.