Scarborough Refutes Vanity Fair Report: ‘No Plans To Run In 2016’

Scarborough Refutes Vanity Fair Report: ‘No Plans To Run In 2016’ 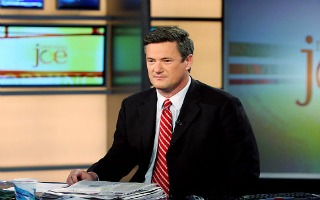 A profile of MSNBC hosts Joe Scarborough and Mika Brzezinski in Vanity Fair claiming that an upcoming memoir authored by Scarborough was a prelude to a presidential bid in 2016 caused a stir on Tuesday. Asked by Politico‘s Dylan Byers to confirm or deny his intention to seek the presidency in four years, Scarborough said that he has “no plans to run in 2016.”

We had the photo shoot and spoke to them in 2010, and they asked me if I was running in 2012. I said no, but did say that Bloomberg’s people and some of my friends had been talking about the possibility of us getting together and discussing possibilities in 2012 — but we never actually sat down and talked about it,” Scarborough, who writes a blog for POLITICO, said. “We were talking generally about 2012, but I never said I was going to run, and there was no reason why I would have said that.

Scarborough said that he made no specific mention of any 2016 plans to Vanity Fair reporter Douglas Brinkley, but he says it is possible MSNBC spokespeople may have mentioned something about the auspicious year while discussing Scarborough’s memoir.

“I’ve got no plans to run in 2016, or in 2020. But you never know what’s going to happen,” Scarborough concluded. He said that Brinkley was pleased with Vanity Fair‘s provocative photo of Brzezinski and “wrapped some text around it.”