Scarborough: These Two Trump Picks Would Be a Modern Day Mickey Mantle and Roger Maris 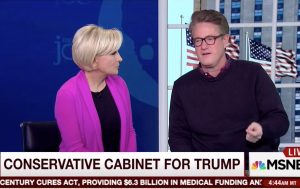 As President-elect Donald Trump continues to fill out his cabinet with only weeks to go until the Inauguration, there are still some key positions vacant. At the top of that list is a job that the soon-to-be Commander in Chief himself has said will be filled next week: Secretary of State.

The list of contenders seems to get longer every day; but as MSNBC’s Joe Scarborough mused Thursday morning, there could be one choice better than the rest. In addition to General James “Mad Dog” Mattis — who was recently tapped to serve as our next Secretary of Defense — Robert Gates would make a one-two punch that earned lofty praise on Morning Joe.

“If it were ever Bob Gates,” said Mike Barnicle of the Secretary of State job, “that would be…”

“The greatest thing in the world,” Mika Brzezinski interrupted.

“I don’t know if Bob Gates would ever do it,” added Scarborough. “He’s served eight presidents,” indicating that the former Defense Secretary is the kind of guy to accept the call of service regardless of the president who asks. “But imagine Bob Gates and Jim Mattis: that would be the strongest one-two combination.”

“That’s as good as it gets,” Scarborough continued. “That really is [Mickey] Mantle and [Roger] Maris,” he added, referencing the New York Yankee greats who led the franchise in the early 1960s.

But in reality, Gates may be a fringe candidate for the gig at best. Gates wrote a scathing op-ed in the Wall Street Journal a few months back where he alleged that then-GOP nominee Trump was “beyond repair.” Gates wrote at the time:

“[Trump] has no clue about the difference between negotiating a business deal and negotiating with sovereign nations. A thin-skinned, temperamental, shoot-from-the-hip and lip, uninformed commander-in-chief is too great a risk for America.”