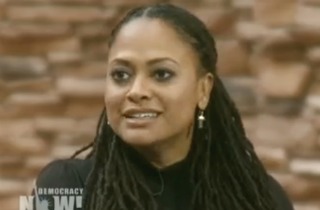 Selma director Ava DuVernay spoke with Democracy Now!‘s Amy Goodman today in an interview that touched upon Selma‘s Oscar snubs and the #OscarsSoWhite Twitter trend that broke out as a result. Selma was nominated for Best Picture and Best Song, but neither DuVernay nor star David Oyelowo got nominations for, respectively, Best Director and Best Actor.

DuVernay repeatedly told Goodman she’s not surprised by not getting the nomination, and honestly she’s not too “bothered” by it that much. Goodman asked her about #OscarsSoWhite and whether there’s something to be said about Academy voters being mostly old white men.

DuVernay didn’t go so far as to say Selma was overlooked because of race, but she did say, “When there’s a consensus that has to be made by a certain group, you know, the consensus is most likely going to be through a specific lens.”

She also made this observation on how Selma shouldn’t have been the only film to have people of color in Oscar-worthy roles this year:

Watch the video below, via Democracy Now!: