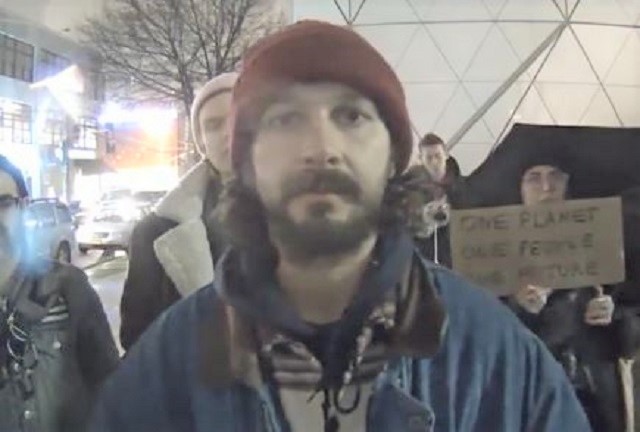 Actor Shia LaBeouf has taken his anti-Donald Trump “art” exhibit overseas to Liverpool, England after claiming that “events have shown that America is simply not safe enough for this artwork to exist.”

The Hollywood Reporter wrote about the move in a Wednesday article. LaBeouf, along with collaborators Nastja Säde Rönkkö and Luke Turner, released a statement on Tuesday saying that “during the initial weeks of the project, the installation was subjected to constant disruption and hate speech by far-right extremists, and a lack of institutional support.”

Back in February 2017, the anti-Trump project’s original venue, the Museum of the Moving Image, pulled the plug after asserting that it became a “flashpoint for violence.”

The three ‘artists’ then moved their exhibition to Albuquerque, New Mexico. According to the statement, “the artists were unable to continue to keep the installation open to the public” there, due to purported “disruption by neo-Nazis, and…gunshots [that] were fired in the vicinity, although unrelated to the project.”

The Hollywood Reporter write-up also noted that “the project was moved again to an unknown location and changed from a participant-based live stream to video of a billowing flag. Trump supporters on online message board 4chan eventually found ways to track down the flag.”

Heat Street reported in a March 10, 2017 item that “4channers were able to triangulate an approximate location of the flag.” Some of them then “stole the ‘He Will Not Divide Us’ flag and replaced it with a Trump ‘Make America Great Again’ hat and a Pepe the Frog t-shirt.”