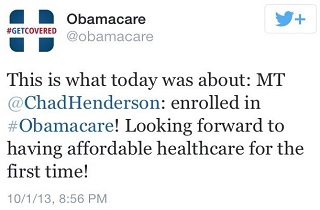 Chad Henderson, the 21 year-old Flintstonian who has become the media’s go-to early example of an Obamacare exchange enrollee, has already become a talking point for conservatives, and the subject of conservative lies. Most glaringly, The Cato Institute‘s director of health policy studies Michael Cannon introduces Henderson with the lie that “Obamacare Increases Man’s Premiums 300%,” then backs it up with another lie that actually turns out to reveal that Republicans screwed poor Chad.

That headline is a self-evident lie, revealed in the Washington Post article that Cannon artfully cherry-picks. WaPo’s Sarah Kliff reveals that Chad Henderson hasn’t had health insurance for over 14 years, which means he had no health insurance premium to quadruple. That makes Cannon’s headline a complete and total lie, and Cannon never gets around to revealing Chad’s pre-Obamacare status one way or the other.

What he does do is deliver a completely different claim than his headline makes, but an equally dishonest one, comparing the $175 premium that Chad got from his Obamacare enrollment with this:

Compare that to what Chad could have paid if he bought one of the pre-Obamacare plans still available on eHealthInsurance.com until December 31. The cheapest such plan for someone meeting Chad’s profile is just $44.72 – as little as 5 percent of his annual income and about one-quarter of his Obamacare premium.

The plan that Cannon selected for Chad was Wellpoint’s SmartSense Plus 10,000 POS plan, and if you think you know what the POS stands for, you’re not far off. That plan has two separate deductibles of $10,000.00 each, and out-of-pocket maximums totaling $10,500.00, for a grand total of $30,500.00 in out of pocket expenses. Obamacare’s Bronze plans, by contrast, have an annual out-of-pocket maximum of $6,350.

The plan that Cannon picked for Chad also doesn’t cover things that Obamacare does, and that premium he quoted comes with a catch. They can charge him more, or deny him coverage altogether, based on his medical history, and even if he gets this POS policy, it limits coverage for preexisting conditions. Chad’s Obamacare policy has none of those flaws, nor will any insurance plan come January 1.

But Cannon’s other big lie, a lie of omission, exposes the human cost of Republican derangement toward Obamacare (emphasis mine):

Kliff reports that after a three-hour ordeal, Chad bought an Obamacare plan that cost him $175 per month – pretty steep, considering he makes less than $11,500 per year. His Obamacare premium comes to least 18 percent of his income. And no, Chad is not eligible for subsidies.

Since he’s quoting Sarah Kliff’s article, he surely knows why Chad isn’t eligible for subsidies, yet chooses not to reveal this:

Henderson is a part-time worker at a day-care center. He did not qualify for tax credits to purchase health coverage because his income is below the poverty line. Since Georgia is not expanding the Medicaid program, that meant Henderson was essentially responsible for his entire premium.

That’s right, if it weren’t for Governor Nathan Deal (R-GA), Chad would be eligible for Medicaid, but since Georgia’s Medicaid eligibility requirement is $8,520 per year or less. and Gov. Deal refused the Obamacare Medicaid expansion that would have covered everyone up to $15,281.00 for individuals, Chad has to pay the whole nut. Here’s what Deal told The Atlanta Journal-Constitution:

“No, I do not have any intentions of expanding Medicaid,” Deal said. “I think that is something our state cannot afford. And even though the federal government promises to pay 100 percent for the first three years and 90 percent thereafter, I think it is probably unrealistic to expect that promise to be fulfilled in the long term, simply because of the financial status that the federal government is in.”

If the conservative Republican anti-Obamacare crusade is so right and just, then there should be no reason for a director at a leading think tank to lie like this. Remember that whenever a conservative tries to talk to you about Obamacare, and read the source material carefully.