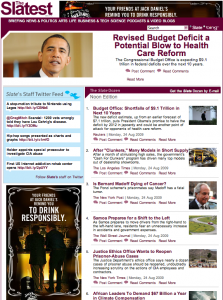 A case of dog chases tail: Slate has refashioned it’s daily aggregation feature “Today’s Papers” because, well, newspapers have started delivering content at a faster, more consistent pace to keep up with their competition online. Woof.

“One of the great conveniences and frustrations of the Web recently has been the rise of the news aggregator,” wrote Slate editor in chief David Plotz to eulogize his 14-year-old aggregation feature, now obsolete, and announce the launch of its replacement — “The Slatest, The most important news and commentary to read right now.” And they do mean right now — like, right now — not just today. The Slatest also replaces “In Other Magazines,” a similar roundup for glossies.

“Today’s Papers” was hilariously backward by contemporary standards. The authors originally collected front pages by fax from newspapers that barely had online editions. (Our first “Today’s Papers” didn’t even have links.) But the column was an instant sensation for Slate, meeting a need our readers hadn’t even realized they had. It hooked an audience: William F. Buckley Jr. was particularly fervent, going into paroxysms if “Today’s Papers” arrived in his inbox late. “Today’s Papers” showed what Web news aggregation was supposed to be: It captured the media zeitgeist, it condensed everything you needed to know into a few paragraphs, and it was fast.

As he says, once Slate was eons ahead of the pack, and now the online magazine is being forced to evolve itself because of pressure from both sides — a print industry playing catch up and an increasingly multifarious and non-stop digital media.

“[‘Today’s Papers’] doesn’t track the news as the day progresses, and it doesn’t encompass all the ways people get their news besides newspapers (blogs, Twitter, TV …),” wrote Plotz. “We’ve come to realize that we haven’t been doing the kind of aggregation most of our readers want.”

According to “The Slatest,” the kind of aggregation that readers want comes in three waves throughout the day: (1) in the morning to recap what the newspapers broke over night; (2) around noon to round-up blog coverage and ‘opinion maker’ spin; and then (3) in the evening to cap off the day’s coverage and preview what’s coming in the next news cycle. These three packets are part of an item called “The Slate Dozen,” basically a list of the most important stories at the time, á la Tina Brown‘s Cheat Sheet.

In addition to the rundown, “The Slatest” features a Twitter feed full of links posted by Slate staffers — the idea, Plotz says, is the bring readers into the intra-office link exchange that used to happen over email: “We realized that our readers might be just as interested in these stories as our colleagues. The items in the Twitter feed usually aren’t the latest news but, rather, the stories that baffle us, amaze us, make us crack up.” The Slatest also features a constantly updating box of headlines from all over — NYT most-mailed, HuffPo, Drudge, TMZ, among others.

Oh, and Plotz forgets to mention quite possibly the most valuable part of “The Slatest”: a huge (huge) ad for Jack Daniels in case all the news is making you thirsty.