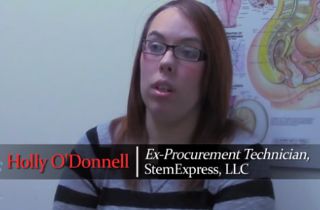 The Center for Medical Progress has released their sixth undercover Planned Parenthood video today, this one allegedly showing a former employee discussing her role in gathering blood and tissue from Parenthood clinics.

The video shows Holly O’Donnell, who worked as a procurement technician for StemExpress, a Parenthood affiliate that provides biomedical researchers with donated fetal specimens. Unlike the previous videos that focused on the allegations that Parenthood is facing, the new video’s focus is on O’Donnell’s self-description as pro-life, and her discomfort with how Parenthood employees discuss tissue research with their clients.

O’Donnell said in the video that Planned Parenthood is breaking federal laws by not getting consent from women by saying that they intend to sell tissue and organs from aborted fetuses for research. O’Donnel claimed that women would be pressured into signing the form even before deciding to go through with the procedure, and that some of her colleagues ignored the forms altogether.

“If there was a higher gestation, and the technicians needed it, there were times when they would just take what they wanted. And these mothers don’t know. And there’s no way they would know,” O’Donnell said.

O’Donnell also described one incident where a colleague took blood instead of fetal tissue from a “high gestated” patient without her consent.

“It’s terrifying,” O’Donnell adds. “Imagine if you were an abortion patient and someone was going in and stealing your baby’s parts.”

The Los Angeles Superior Court issued a temporary restraining order earlier this month, prohibiting the Center for Medical Progress from releasing videos featuring StemExpress leaders. Parenthood spokesman Eric Ferrero released a statement to CNN, continuing their argument that the videos were illegally gathered and edited to negatively portray the organization:

The video released today shows someone who has never worked for Planned Parenthood making false and outrageous claims, without any evidence to back them up…Planned Parenthood follows all laws — period. This latest video is part of a fraud intended to deceive the public and advance an extreme political agenda, and nothing on this video substantiates false claims from anti-abortion activists.

Jezebel reported that they received word from StemExpress about the video, alleging O’Donnell violated a confidentiality agreement and stole confidential documents from them for CMP.

You can watch the video here: via Youtube (WARNING: Graphic Images)