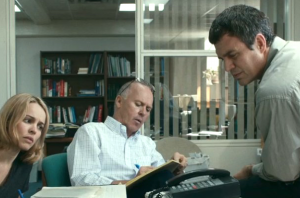 If there was ever a weekend to escape the horrible reality our world and country has become in light of the mass killings in San Bernardino and Colorado Springs before it, this may be as good as any. And for me, that escape usual means a trip to the local movie theatre.

Those trips used to happen much more often as a single guy living in Hoboken, NJ. Wife, two kids and a dog in the suburbs? Not so much. So when that trek to the cinema does happen, the movie better damn well be worth the time. Painfully selective is how the wife deems the process. She’s not much of a buff, and it’s the one area she has 100 percent confidence in my ability to choose a winner, particularly films of the underrated variety (The Debt, Blood Diamond, The Pursuit of Happyness, Friends with Kids and The Prestige are my tops of the past decade). But if we’re talking about a movie that absolutely isn’t underrated but isn’t making much at the box office (only about $15 million despite a wide release over two weeks ago), Spotlight is the best journalism-themed movie since The Insider (Pacino, Crowe), arguably the best of all-time if removing All the President’s Men (Redford, Hoffman) from the equation, and easily, easily the best offering of any genre this year.

Spotlight takes place largely in 2001 Boston and centers on the meticulous, careful, tireless investigative efforts that went into the the Boston Globe’s exposé of clergy sex abuse in the Roman Catholic Church. Note: Director Tom McCarthy could have gone two ways in crafting the narrative: Focus on the investigative aspect and all the challenges the Globe’s “Spotlight” team had to overcome in being completely, unquestionably accurate before going to press, or use the investigation and its findings to pontificate some kind of bigger, darker message about the Catholic Church or religion in general. And like The Insider (the mesmerizing true story of a 60 Minutes report–or modified report–about a big tobacco whistle-blower) and All the President’s Men (the must-see story behind Woodward and Bernstein blowing the lid off of Watergate), McCarthy avoids being self-righteous about the transgressions exposed and the entity that allowed it. Instead, it keeps the focus squarely on the behind the scenes battles and politics that are prevalent in newsrooms, along with the business aspect of journalism in general.

For example, the story begins 14 year ago at a time when papers like the Globe are suddenly competing with online journalism. The supervising editor the Spotlight unit (Michael Keaton’s Walter Robinson) is worried his team’s core mission–choosing which stories to pursue and conducting research oftentimes for over a year while earning a full-time salary–will soon be unsustainable. This concern proves to be prophetic, as many investigative units in print and broadcast have significantly shrunk or disbanded completely for that very reason: The speed of internet information and opinion…which can be created almost instantly and more importantly, very cheaply (particularly when compared to the cost of an investigative unit).

Note: In 2007, Lisa Myers, then of NBC News, and Sharyl Attkisson, then of CBS News, logged about 160 minutes of total air-time that year on CBS and NBC. In 2013, that number dropped to 43 and 54 minutes, respectively (two-thirds of airtime gone). Why is that? Probably because investigative reporting, unfortunately, is no longer a profit center. And what’s easier to do? Take a reporter, producer, technician, hire security if you’re, for instance, going to a dangerous part of the world, satellite uplinks that cost thousands of dollars and maybe come back without a story after months of investigation? Or put a few folks around the table and spout off opinions on news that already exists? That isn’t a criticism of the latter since opinions fuel cable news these days (and because, yes, I’m mostly an opinion writer). Again, nobody is justifying the slow death of objective investigative journalism nor criticizing the rise of POV programming…it’s just a snapshot of the state journalism today.

Back to the movie (without giving away too much), Spotlight portrays investigative reporting not in a sexy way (because it rarely is) but for what it really is: A long, monotonous, frustrating pursuit of a truth the reporters involved know probably exists but need much more testimony and evidence to prove before going to print. The Spotlight investigation consists what may now seem like a lost art: Digging through archives, knocking on doors, and connecting dots over a very long period of time while dealing with the subtle fear that all of the calories burned may eventually result in nothing to show for it. In Spotlight’s case, its four reporters are taking on a highly-respected, deeply-rooted institution in the form of the Catholic Church. And instead of portraying said reporters all as heroes with soaring rhetoric set to dramatic music, McCarthy quietly humanizes them instead (three of the characters come from Catholic households, and are openly conflicted on whether they’re doing the right thing or not throughout the film).

Every actor is tremendous here (Disclosure: I’ve always had build-in favorable bias for one of the stars–Rachel McAdams–going back to Wedding Crashers, and she’s solid here as usual). But Keaton and Mark Ruffalo are particularly exceptional here as well (Keaton is this decade’s Travolta in terms of out-of-nowhere comebacks) and each will walk away with their share of trophies as a result. Kudos to casting director Kerry Barden, by the way: All three have done very good movies about investigative journalism before: Keaton in HBO’s Live from Baghdad (my favorite of any HBO original movie) and The Paper (you may recall the infamous fight scene with Glenn Close), Ruffalo in 2007’s The Zodiac and McAdams in 2009’s State of Play and Morning Glory.

If you’re looking for explosions, car chases, graphic flashbacks or pointless romances that have almost nothing to do with the overall plot, this isn’t the movie for you. If you want a wonderfully acted, smart flick without preachy monologues in favor of disciplined storytelling, you’re in for a real treat. Even the Vatican’s official radio outlet calls Spotlight “honest” and “compelling”.

It’s hard to believe that 2001 represented almost a completely different era of journalism, which served as the embryonic stage of internet publications and all the opinion that goes with it. So much has changed since then and mostly not for the better (trust in media is now at an all-time low at 40 percent; in 2001, it was at 52 percent). Investigative units are a dying breed, and that’s a shame.

The movies are always a great getaway when real-world events on television becoming too prevalent and/or depressing to avoid or overcome. You might hear that Spotlight is a story about sexual abuse by Priests and decide that’s equally as depressing. Don’t be fooled…that’s not what this movie is about, not even close. It’s a serious Oscar contender and should/will be mentioned in the same breath as All in President’s Men and The Insider (both nominated for Best Picture).

Four stars (out of four). Don’t miss it.