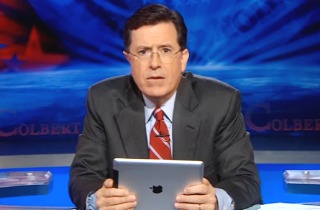 Apple is holding one of its big Shut Up and Take My Money events today, and it ended up featuring a surprise celebrity cameo: Stephen Colbert. Colbert has repeatedly demanded Apple products on his show in the past, and even bragged about his iPad when he presented at the Grammys.

Craig Federighi was demonstrating the interconnectivity between Apple’s devices, and placed a call directly to Colbert, who was identified as Apple’s new “chief of security.” Colbert called him “Chairman Honeycrisp” and declared he wants his new title to be either “Supreme Allied Commander of Super Secrecy” or “Intergalactic Chancellor.”

Stephen Colbert cameos at the Apple launch to complain about the Watch delays. "You know what I see when I look at my wrist? My wrist!"

An Apple exec and Stephen Colbert are doing an entire comedy routine on stage, over the phone. This is the Dad-jokiest company in tech.

Stephen Colbert on the phone with Craig Federighi right now, which is like a hairsplosion of forced humor that threatens to consume us all.

Phone call between Craig Federighi and Stephen Colbert is HISTERICAL. And made from a Mac!

Give Colbert and Craig a buddy romcom

And if you need to see how it looked for everyone inside, here’s a picture: