Here Are Some People Making Quick Bucks off Ebola

Here Are Some People Making Quick Bucks off Ebola 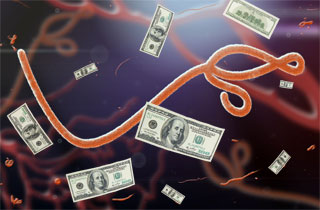 With ebola becoming a national health scare, someone is profiting — and for once, we don’t mean the media.

Though we kind of do: no doubt you’ve run into numerous financial stories suggesting that people invest in companies that produce hazmat suits and face masks, or pharmaceutical and biomedical companies researching cures or vaccines for ebola. (According to some sources, sadly, you missed the ebola money boat.)

However, those are legitimate (if kind of slimy) investments, fulfilling actual needs in the market of preventing and containing the disease. We’re talking about the spurious products, the fear-capitalizing salesmen, the craven a-holes. While we’re sure we’ll see a bunch of them in the near future, the wave has begun, friends.

Here’s a dick who’s making a boatload of money by selling ebola-preventing wafers: according to TMZ, entrepreneur Todd Spinelli has made over $480,000 selling “Ebola-C,” a wafer that claims to boost one’s immune system by providing 554% of the daily recommended amount of Vitamin C. The product hasn’t been approved by the FDA, but Spinelli claims that a doctor on his staff says it totally works. So far, Spinelli’s sold 14,000 units for $34.95 each.

(Fun fact: the idea that Vitamin C is an immune-boosting supplement may be a total myth, with Harvard University pointing out that many of the studies touting its benefits are “not well designed.”)

Here’s another guy who bought the web domain Ebola.com, and hopes to sell it to a pharmaceutical company and/or international entity for $150,000. To be fair, it does have some links to credible informational resources, as well as a link to Doctors Without Borders’ donation page. But its owner wants money, because ebola.

“According to our site meter, we’re already doing 5,000 page views per day just by people typing in Ebola.com to see what’s there,” Jon Schultz, who bought the domain name for $13,500, told the Washington Post. “We’re getting inquiries every day about the sale of it. I have a lot of experience in this sort of domain business, and my sense is that $150,000 is reasonable.” (This is also the guy who owns, or has previously owned, terror.com, fukishima.com, birdflu.com, and PotassiumIodine.com.)

In adorable toy news: Giant Microbes, a company that sells stuffed animals shaped like common viruses, has sold out of their ebola toys. It’s an unfortunate coincidence in their case: they sell stuffed animal versions of every virus under the sun, including gonorrhea, HIV, and herpes, and have been doing so long before ebola became the crisis it is today. But the product’s description is unfortunately twee in retrospect:

Since its discovery in 1976, Ebola has become the T. Rex of microbes. Share the love!