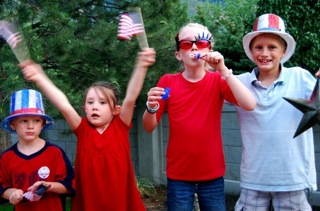 This weekend, families all across America are preparing for some grilling, beach time, and time out under the stars and fireworks. This Fourth of July, however, liberal parents may have an added incentive not to take their kids out to watch the fireworks– according to Harvard Kennedy School researchers, children who celebrated Independence Day in some form were more likely to be registered Republicans upon growing up.

Yes, it’s apparently true. According to the Harvard Kennedy School– which, it cannot be emphasized enough, is a different institution than Harvard College (the College gave us T.S. Eliot; the Kennedy school, Alan Grayson)– being openly patriotic around children during this time of year can cause them both to be more politically engaged in the future and more likely to be members of the Republican Party. Assistant Professor David Yanagizawa-Drott and Bocconi University Assistant Professor Andreas Madestam studied the difference between adults who went to Independence Day activities and those who don’t by looking at historical weather patterns. Children who lived in places with more rainfall on July 4th every year were less likely to participate in parades, and, they explain, “because rain is a random event,” they can “isolate the effect of attending the celebrations from other important factors such as family background and education.” And they found large overall patterns:

Key conclusions in the paper include:

• Fourth of July celebrations have a significant impact upon people’s political preferences;
• Attending one Fourth of July before age 18 increases the likelihood of identifying as a Republican by at least 2 percent and voting for the Republican candidate by 4 percent. It also increases voter turnout by 0.9 percent and boosts political campaign contributions by 3 percent.

Given the extremely random nature of rain and the fact that many more Republican than Democratic politicians have been successful in getting elected between the Reagan era and today, these numbers are, while academically approved, somewhat up for debate. The rain factor also complicates things, as some parts of the country are simply far more likely to receive rain during a certain season than others, so it’s likely a wise thing to wait before applying the results of this study to your weekend activities.