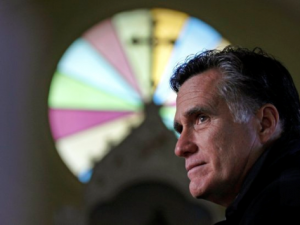 Republican presidential candidate Mitt Romney hasn’t gone out of his way to mention his religion — and a new survey suggests he may want to continue avoiding it. The American National Election Studies’ survey, anti-Mormon sentiment among liberals and non-religious voters may be on the rise.

In general, the study suggests the trend may be attributed to Romney’s candidacy and “Mormon activism against same-sex marriage.” It further describes the awkward place of Mormonism in politics: “regarded by secular liberals as hardcore religious conservatives but seen as possible heretics by other religious conservatives.”

Almost 35 percent of respondents questioned in February said they were “less likely” to vote for a Mormon, which is up nine points from a 2007 Pew survey. BuzzFeed’s McKay Coppins notes, “The uptick in anti-Mormon voter attitudes may come as a surprise to those who predicted Romney’s candidacy would have a mainstreaming effect on his faith.” Rather, he writes, “Romney’s rise may have lead to increased anxiety about his religion among his natural political opponents.”

“Aversion to Mormons is still an important foce in American public opinion, and one that seriously affects Romney’s chances even if he ultimately overcomes it,” writes David Smith, the paper’s author. The analysis goes into detail about how views of the religion can predict votes.

But, as Coppins points out, studies should be taken with a grain of salt. The data was collected in late February/beginning of March, when “Romney was the clear frontrunner, but far from the presumed nominee.” Since then, the party’s been less divided, shifting focus to the anti-Obama message. Now, he writes, the question is whether he “can overcome Christian conservatives’ deep-seated theological differences.” If the aim is “anyone but Obama,” then it’s likely he can.