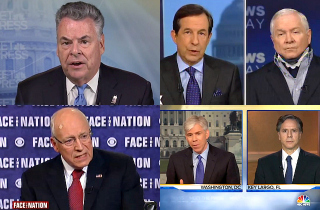 It was another week of tough Putin talk on the Sunday shows, and another week of that bluster hiding that there’s little daylight between the hawks and doves or Republicans and Democrats or the Obama administration and anybody else as to what to actually do about Russia.

Leaving aside the question of whether sanctions will work (they won’t, particularly), or whether we should enact them anyway (some think so), the menu of options on Crimea is limited. Dick Cheney told Face the Nation we should establish the missile defense operations in Poland and the Czech Republic, which the U.S. scuttled in deference to Russia a ways back. He also thinks we should provide military support to surrounding countries, with which Representative Peter King (R-NY) agrees, though the latter was careful to point out that there’s no “silver bullet” to kicking Putin out of the Crimean peninsula. (And when King, a hawk of hawks, says that, you know it’s true.)

None of these, good or bad policy though they may be, are going to make a bit of difference in the short term. Which means the GOP voices on Sunday were recommending the same responses the Obama administration is taking or is considering: freezing Russian travel visas, seizing foreign assets, hitting Russia in its ruble, etc. Again, in a better world, this would be called consensus.

Meanwhile, Robert Gates would like to have a word with Fox News’s talking points. First, the former Defense Secretary rolled his eyes at the “Obama is weak” narrative: “Putin invaded Georgia, I didn’t hear anybody accusing Bush of being weak or unwilling to use force,” Gates said. Then he scoffed at Chris Wallace’s cheap “why is Obama golfing?!?!?!1?1?!” ply by pointing out that human beings, even Republican presidents named Bush, need time off. Wallace credited Gates with a “very diplomatic” answer, which seemed a tacit admission that he got off easy:

David Gregory sure ate his Wheaties yesterday morning, going after Deputy National Security Advisor Tony Blinken and Rep. King on Putin, and later Cardinal Timothy Dolan on civil unions. Nice to see Gregory so feisty with the follow-up questions, but he seems under the impression that President Obama, or anybody, can control Putin.