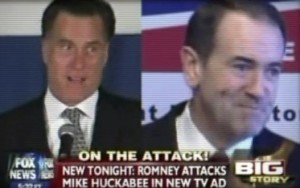 Earlier today, we brought you Ann Coulter‘s flip-flop on flip-flopper Mitt Romney (a Möbius flip of sorts), and in keeping with that snake eating its tail theme, anti-Romney superPACs American Bridge and Priorities USA have teamed up to attack Mitt Romney for attacking Newt Gingrich…while simultaneously airing those same attacks. American Bridge put out an ad today that frames Romney’s history of going negative as part of his willingness to say anything to get elected, and as a betrayal of Ronald Reagan‘s 11th Commandment.

The ad, supported by a background memo from Priorities USA, starts out with a clip from a pro-Romney superPAC ad that ticks off Gingrich’s $300,000 ethics fine and his Freddie Mac booty, before cutting to some cable news footage of Megyn Kelly name-checking Ronald Reagan’s 11th Commandment (“Thou shalt not speak ill of any fellow Republican”), and a review of Romney’s attack tactics during the 2008 election. It’s a neat little twofer, or a threefer if you count the copious Reagan references, sure to get under the skin of any conservative:

Superficially, it seems unfair to attack a politician for going negative, especially the day after the same politician put out an ostensibly positive ad and was savaged for it, but the distinction here is that Romney doesn’t just go negative often, he goes negative early. While American Bridge and Priorities aren’t exactly neutral, plenty of political observers on all sides have observed that the Romney offensive has a desperate, kitchen-sink whiff to it.

That’s an important distinction to make, because there isn’t a liberal out there who wants to declare a kibosh of any kind on negative campaigning. Republicans have gotten used to Democratic presidential candidates, even winning ones, leaving the best ammo in the can, but if early signs are any indication, the Obama reelection effort will be bringing a squadron of Predator drones to this gunfight.

Here’s the full text of the ad’s accompanying memo, from Priorities USA:

As we learned from the 2008 campaign, the more desperate Romney gets, the more negative he becomes. This week is the beginning of the 2012 edition of Mitt Romney’s GOP Desperation Express. His negative campaigns are kissing cousins of his positive campaigns in one regard: He’ll say and do anything if he things it will help him get elected.

During the 2008 campaign, Romney launched attacks against every one of his major rivals– Mike Huckabee, John McCain, Fred Thompson, Rudy Giuliani. His Republican opponents said of the ads: “distortion,” “hypocrisy,” “lying,” “desperate,” “dishonest,” “simply aren’t true,” and “clear willingness to say and do anything for political gain.” While the Republican candidates disagreed on much, there was a general agreement that Romney’s relentless attacks were unfair.

Many commentators argued that the ads backfired – helping to propel Huckabee and McCain to come-from-behind victories in Iowa and New Hampshire. But in 2008 and 2012, a scorched-earth campaign is the only strategic path for a candidate who has shown for six years that the appeal of his positive message is limited to 25% of Republican primary voters.

It’s not just the negativity of Romney’s attacks that turns off voters, it’s that their message reinforces Romney’s key weakness. In 2008 and now, Romney launched harsh immigration attacks accusing opponents of supporting “amnesty” when he had earlier defended the same plan and said it was “not amnesty.” He bashes opponents as career politicians despite his 17-year political career. He attacked John McCain for opposing tax cuts that he had refused to take a position on.  He went after Giuliani for pro-choice views despite his own long history of claiming to support abortion rights.

These obviously hypocritical attacks may help explain why nearly half of Republican voters believe Romney “will do or say anything to win.”

As we learned from the 2008 campaign, the more desperate Romney gets, the more negative he becomes. This week is just the beginning.

Senator McCain had to defend himself against Mitt Romney’s attacks in 2008. Responding to Mitt Romney during a 2008 debate, John McCain defending his immigration plan saying, “It’s not amnesty. And for you to describe it as you do in the attack ads, my friend, you can spend your whole fortune on these attack ads, but it still won’t be true.” [ABC News transcript, 1/5/08; Video]

Giuliani Campaign: Iowa Voters Can’t Be Bought By Romney Attacks. The Giuliani campaign responded to Romney’s mailing saying, “Iowa voters can’t be bought and they certainly won’t buy what Mitt Romney is selling distortion, hypocrisy and a clear willingness to say and do anything for political gain.” The campaign added that when he was governor, Romney had “a record that included allowing the number of illegal immigrants to skyrocket while he was in charge, and even hiring some of them to work on his lawn while he was governor.” [Associated Press, 11/6/07]

Mike Huckabee criticized Mitt Romney for running attack ads in the 2008 campaign, calling him “desperate” and “dishonest.” In a December 2008 appearance on Meet the Press, Mike Huckabee said, “Mitt Romney is running a very desperate and, frankly, a dishonest campaign.  He’s attacked me, and, and yesterday–or Friday, I guess it was, he launched then just a broadside attack against Senator McCain.  Now, Senator McCain and I are rivals for the presidency, but I’ve said on many occasions, I’ll say it again here today, Senator McCain is an honorable man, and I believe he’s an honest man.  I believe he’s a man of conviction.  And I felt like that, when Mitt Romney went after the integrity of John McCain, he stepped across a line.” [Meet the Press transcript, 12/30/07]

Mike Huckabee criticized Mitt Romney for negative ads during the 2008 campaign. According to the Washington Times, Huckabee accused “Mr. Romney of directing dishonest attacks at the entire Republican field. “If he becomes president, he will likely not start being honest in the job if he had to be dishonest to get there,” said Mr. Huckabee, a former Arkansas governor.” [The Washington Times, 12/30/07]

Mike Huckabee criticized Mitt Romney’s 2008 campaign for negative attacks, calling them “out of bounds.” Speaking to CNN, Huckabee said that, “And I just think that the attacks by the Romney campaign have gotten really kind of out of bounds for good politics, particularly within the Republican Party, totally violating Reagan’s 11th commandment. And it’s certainly not the kind of, I think, discourse that makes for a good election and for a good decision on the part of the voters.” [CNN transcript, 12/31/07]

John McCain criticized Mitt Romney’s 2008 campaign for negative attacks. Speaking to reporters in South Carolina, McCain said “I wish we could talk about our own qualifications and vision rather than attacking other candidates which apparently the Romney campaign seems to be doing rather frequently and I don’t think it helps.” [CBS News, 12/11/07]

Romney Attacked McCain, Giuliani, Gingrich for Supporting “Amnesty,” Despite His Previous Praise for the Same Plan. In the 2008 campaign, Romney claimed in a debate that he was not calling John McCain’s plan “amnesty” but had two television ads running that made that claim, despite the fact that Romney had previously said McCain’s plan was “not amnesty.” McCain said, “you can spend your whole fortune on these attack ads, but it still won’t be true.” Romney then claimed while he was attacking McCain for supporting amnesty, he couldn’t define it himself, saying, “you’re going to have to define the word for me.” This year Romney has attacked Gingrich for supporting “amnesty” and was corned on Fox News for seeming to favor the same policy. [Boston Globe, 11/29/11; Rush Limbaugh, 11/23/11; McCain Challenging Romney on Immigration in 2007 Debate]

Mitt Romney attacked Rudy Giuliani’s for being pro-choice despite Romney previously claiming to be pro-choice. While speaking to reporters in New Hampshire, Romney said “I believe it’s important for someone to be pro-life, to be pro-family and pro-traditional marriage, to be in favor of legal immigration but against illegal immigration and to have a record of insisting on the highest ethical standards, and I’m afraid that on all four of those measures that Mayor Giuliani would be the wrong course for our party.” [Washington Post, 11/26/07]