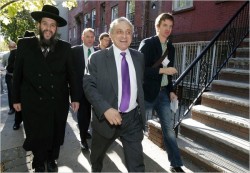 The fallout from Carl Paladino‘s crash and burn anti-gay remarks over the weekend continues. In today’s news even his adviser appears to want nothing more to do with him. Lloyd Grove spoke to “eccentric” Republican political consultant Roger Stone (he has a Nixon tattoo on his back) who said he was “astounded” by the comments.

“It’s astounding,” a distressed Stone told me Monday as the 64-year-old Paladino was making the morning-show rounds trying to clean up after his widely criticized homophobic speech Sunday to Hasidic Jews in Brooklyn. “Based on his anti-gay rant, any advice that I’m giving this guy is no longer having any effect….It doesn’t even seem to be consistent with his ‘live and let live’ philosophy. When I asked what happened, the answer was no answer: ‘Yeah, it was a f*ckup.’”

Yes indeedy. How did that “f*ckup” happen exactly? Apparently Paladino was taking advice from an Orthodox Rabbi who has “long dreamed of creating ‘an Orthodox Tea Party.’” From today’s NYT:

Mr. Levin, who is a spokesman for the Rabbinical Alliance of America, an association of socially conservative rabbis, shares with Mr. Paladino a proclivity for inflammatory public statements, particularly about homosexuality. He spoke out against a gay pride festival in Jerusalem several years ago, saying it would amount to “the spiritual rape of the Holy City” and proclaimed, “This is not the homo land, this is the Holy Land.”

On Monday, Mr. Paladino said that the two speeches he had made in Brooklyn on Sunday were prepared by someone else, and that he had stricken out some ideas with which he did not agree. In the interview, Mr. Levin said he had written one of the speeches and contributed to the second, in which Mr. Paladino warned against brainwashing children into accepting homosexuality. “I did not write the second speech,” Mr. Levin said. “However, I did have some input into it — and I stand ready to defend the content of it.”

Presumably ‘the Rabbi made me do it’ was not a campaign slogan Paladino felt he could run with, instead he merely attacked Andrew Cuomo (Cuomophobe!) for exposing his children to “that nonsense of extremists in the Gay Pride Parade.” Like I said, if Paladino wants to ensure a bunch of typically non-voting liberal New Yorkers get out to the polls in November he’s certainly going about it in the right way.