Ted Nugent Reacts To CBS Interview: ‘Left Media’ Tries To Paint Me As ‘Nasty Man Who Wants To Rape Your Puppy’ 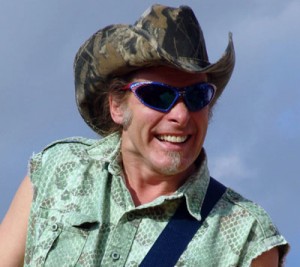 They don’t call him the Motor City Madman for nothing. Ted Nugent sat down with talk radio host Mike Broomhead today to explain his… unique interview on CBS this morning where he basically tore into his interviewer, Jeff Glor, for telling him he is not a moderate. Nugent said he was offended by that sentiment because of all the charity work he does for military families and young children, and ripped into the “left media” for trying to paint him as someone with radical views who threatened the life of the president of the United States and a “mean, nasty man who wants to rape your puppy.”

Nugent admitted he did not watch the interview when it aired, but he explained that CBS approached him about doing an interview to follow up on his comments about President Obama and subsequent sit down with the Secret Service. Nugent said the interview lasted approximately one hour, bragging that he gave them “the greatest interview you can get.”

Broomhead brought up the exchange Nugent had about whether or not he was a political moderate. Nugent called out both DNC Chairwoman Debbie Wasserman-Schultz and House Minority Leader Nancy Pelosi for claiming he threatened the president, before tearing into CBS for trying to frame him as not moderate in any way.

“CBS… will never have anybody on their show who is called by more families of dying little boys and girls to request someone to take them on their last request in life. Hunting, fishing, usually. I’m called for the last 30 years by families in the most traumatic moments of their life… Mike, if I pass that test of decency, guess what I am? Okay.”

Nugent marveled at how all the charity he gets to do with families and little children involves “killing things.” He said that he has signed weapons and sent them to military and children’s charities. He ended by saying, “The left media… will try to tell you that I threaten the president’s life and that I’m a mean, nasty man who wants to rape your puppy.”

Listen to the audio below, courtesy of News Talk 550 KFYI: