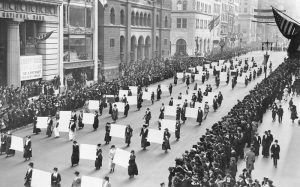 Throughout the 2016 election season with the rise of Hillary Clinton, her critics on the left never failed to pronounce that Clinton’s was a victory for “white feminism,” not intersectional feminism. They cited Clinton’s record of supporting policies that led to racial policing and mass incarceration, as well as her foreign policy’s at times harsh consequences for men and women in the Middle East and Latin America and her record against gay rights.

Granted, Clinton did what she could to make amends for the past with a more inclusive agenda this time around, but the point that there exists a phenomenon called “white feminism” is perfectly real and valid.

The enfranchisement of women throughout history has been paved with the exclusion and oppression of women of color, of immigrant women, poor women, trans women, and other groups, and today, white feminism is the brand of “feminism” that erases and fails to consider that non-straight, wealthy, white women continue to face myriad of identity-based struggles. And, of course, all while straight, wealthy white women face a fraction of the oppression that other women do.

Nothing made this clearer than the recent white supreamcist-led marches in different parts of the country, but most prominently in Charlottesville, in which a sort of ethnic cleanse — one that would spare white women — was widely proposed.

And while most in the marches and rallies were male white supremacists, in a scathing installment of Teen Vogue‘s “OG History” column last week, activist Evette Dionne exposed prominent white women’s suffragists as the self-admitted white supremacists they were. From Susan B. Anthony, whose grave was buried in women’s “I Voted” stickers on Election Day last year, to Elizabeth Cady Stanton, many of these famous suffragist frequently maligned black activists, or worse yet, outright opposed black men being able to vote.

Notably, a women’s rights magazine founded by Anthony and Stanton received funding from George Francis Train, a Democrat who supported slavery, Dionne noted. And, according to Dionne, where activists “Lucy Stone, Julia Ward Howe, and others created the American Women Suffrage Association to explicitly endorse the 15th Amendment” and included black men and black women alike, Rebecca Ann Latimer Felton, the first woman to serve in the U.S. senate, said she did “not want to see a negro man walk to the polls and vote on who should handle my tax money, while I myself cannot vote at all.”

The column also drew on a terrifying but well-documented cultural history in which white women and voting rights activists justified the act of lynching black men, most often to stop them from voting, by citing the need to protect “white women’s purity.”

The point of the column was not to sweepingly blast every white woman’s feminism as artificial or un-inclusive or racist and damaging, but to point out that white feminism — a brand of activism that promotes the rights of the most privileged group of women while simultaneously ignoring or even outright oppressing everyone else — does exist, and is deeply rooted in history.

Especially at a time in which history and its modern value are being brought to the forefront amidst a dialogue around Confederate statues and why they still stand, this reminder from Teen Vogue about the history of women’s suffrage is important.

Feminism is a movement about enfranchising and empowering every group — cisgender or transgender, gay or straight, Muslim or Christian, and of all races and socioeconomic backgrounds — with the power to make peaceful choices about their lives and participate in society. Anything that empowers one group while hurting and oppressing another isn’t feminism.