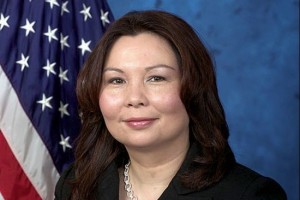 Illinois Sen. Tammy Duckworth, a Democrat and one of three senators who served in the military and have denounced President Trump’s ban on trans people in the military, on Thursday spoke out in response to Trump moving forward with the order.

“When I was bleeding to death in my Black Hawk helicopter after I was shot down, I didn’t care if the American troops risking their lives to help save me were gay, straight, transgender, black, white or brown,” Duckworth’s press release said. “If you are willing to risk your life for our country and you can do the job, you should be able to serve — no matter your gender identity or sexual orientation. Anything else is not just discriminatory, it is disruptive to our military and it is counterproductive to our national security.”

Duckworth’s words are particularly illuminating because of their simplicity — when it’s life or death, as it so often winds up being in war zones, who is saving you doesn’t really matter so long as they’re saving you. The reason Trump is so unable to recognize this?

Contrary to his branding himself as a man’s man who knows more about war and ISIS “than the generals,” a masculine tough-guy ready to beat up CNN, it’s important to recognize that this persona is a fraud he’s sold to his supporters — you know, not unlike all the other legal charges of fraud leveraged against him. Trump dodged the draft not once but four times. By no means should the draft system be glorified, but Trump can hardly swagger around pretending to be a military expert and calling prisoners of war losers when he hi,self denied every opportunity he received to serve.

Having never been in Duckworth’s position — or that of anyone in the military who almost lost their life and wouldn’t have cared if a trans or cis, gay or straight person were helping them, Trump is in no position to make his misinformed, bigoted beliefs the law.

He also obviously doesn’t know more than the generals — or students of a fifth grade math class — if he’s unable to see how marginal the costs for trans health care in the military are, relative to costs for Viagara, nor how the military is hardly in a position to turn down anyone who’s willing and capable.

“If the President enacts this ban, which would harm our military readiness, the Democratic and Republican Members of Congress who oppose this discrimination must enact legislation that prevents it from taking effect,” Duckworth wrote. From a moral and strategic standpoint, the ban would be ridiculous.

But if Trump is unwilling to listen to current, male military leaders about this, given his record of disrespect and dismissiveness toward women who speak against him, it’s unlikely he’ll listen to Duckworth, just as it’s likely that her being female and a military hero, where he’s male and a draft dodger, won’t sit well with Trump either.