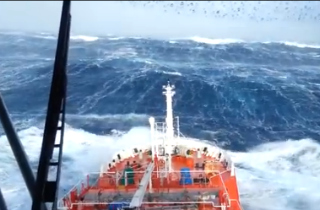 It doesn’t make very good journalistic sense, on the other hand. But it’s not as if anyone really cares about that anymore.

The latest tragedy opportunists to cash in on our appetite for anything related to the missing plane is a Facebook page called Salha Zain who uncovered a shocking video of the rough seas in the Indian Ocean that may help explain why finding signs of the plane have been so difficult for searchers.

Aiding in the cause is a YouTube channel called GlobalLeaks whose posting of the video has about 80,000 views at the moment, an increase of 10,000 since I first started writing this post.

As you can probably guess, the video is bullshit. That didn’t stop ostensibly respectable media outlets like London’s Telegraph from helping it go viral.

As more than a few observers pointed out, not only is the video from last year, it wasn’t even taken in the Indian Ocean. It’s actually footage taken in the Atlantic ocean during a hurricane from 2013. You can see the original below:

Some of the sites who were duped by the video have amended or updated their posts. Elite Daily have affixed a correction, to their credit, however only at the bottom of the post. They’ve still got the video featured prominently under the headline “This Wild Footage Shows Why Finding The Missing Plane In The Indian Ocean Is Virtually Impossible (Video).”

Finding the plane last year in another ocean certainly would be impossible!

You’d expect as much from a nonsense site like that, but the Telegraph, on the other hand, have scrubbed any evidence of their sharing the video. Not only is the page with the original post gone, (which can be seen here on one of those horrible clone sites whose existence I curse daily until something like this comes up), but their correction is gone as well. It read, for the record: “This video was recently posted on our site stating that it was from the Indian Ocean search for Malaysia Airlines MH370. However it has since been established that this was filmed by Ivan Zakryzhevskiy on Jan 19, 2013 in an operation during Hurricanes.”

Not exactly on the up and up. It’s a bad sign when something called StoryPick is illustrating better journalistic ethics than a leading newspaper.

The GlobalLeaks video just got another 10,000 views since I last checked. Here’s how they explain their mission on their page:

“We are sharing this footage ONLY for the purposes of news reporting and educating. GlobalLeaks is a news channel where we strive to show people the news that has been left out of the main-stream media. This footage is also part of an ongoing documentary on ‘events that shape our perspective’.”

Our perspective is certainly being shaped alright.