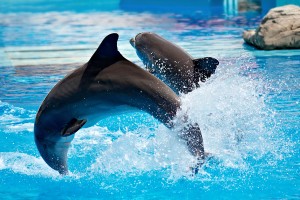 For god’s sake people, put your damn phone down and walk away from the majestic creature.

Yesterday marked the third time in recent weeks that a selfie-obsessed clown ripped an animal from its natural habitat for all the likes and shares imaginable, only to leave the unwilling accomplice dead. A woman in Macedonia dragged a white swan from Lake Ohrid because the sierra filter on Instagram is really too irresistible sometimes.

According to HuffPo UK, “After the woman took her photo, the swan remained motionless on the shore,” where it later died. But that incident isn’t quite as depressing as the rare La Plata baby dolphin in Argentina recently who met its demise surrounded by casual beachgoers.

A crowd of dozens of Argentinians scooped up the aquatic mammal and passed it around like the Stanley Cup of stupid people sports. The Head of Campaigns at World Animal Protection actually had to respond to the incident with the clarifying note, “If you can pet it, ride it or take a selfie with it then the animal is likely to be suffering.”

All this, while a once-beautiful peacock met an untimely death (no, not MSNBC) in China when tourists tossed around the bird like a play thing. The zoo representative from the Yunnan Wild Animals Park announced that the bird had quite literally been “scared to death”.

If I don’t like your regular selfie, I sure as hell won’t like it when you capture the moment you’re clutching onto a barely-gasping puffin in its final moments of life. Enjoy the wilderness for what it is, fools.