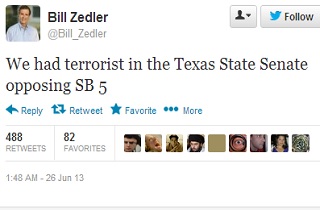 Texas State Senator Wendy Davis (D-TX) has taken America by storm with her Tuesday night stand against a Republican attempt to pass an unconstitutional abortion ban, even being gushed over by CBS This Morning‘s anchors. Not everyone was so enthusiastic about Sen. Davis’ defense of a woman’s right to choose, including one of her colleagues. Texas State Rep. Bill Zedler gave new meaning to the term “lower chamber” when he tweeted, shortly after Democrats successfully put off a vote on the bill, “We had terrorist in the Texas State Senate opposing SB 5.”

On Tuesday, Sen. Davis stood as a lone warrior against the Republican-controlled Texas legislature’s attempt to enact an unconstitutional ban on abortions at 20 weeks, and to shut down most of the state’s abortion clinics via trap laws, all during a special legislative session that required fewer votes for passage. As the midnight deadline for the end of the special session neared, Republicans halted Davis’ filibuster via a contested point of order, at which point other Democratic senators tried to run out the clock with a series of parliamentary inquiries. With 15 minutes to go, and the Democrats’ maneuvers exhausted, the crowd of supporters in the gallery carried the ball across the goal line, cheering and clapping loudly enough to prevent the Republicans from completing the vote in time.

It was a symbolic, if short-lived, victory, as Gov. Rick Perry has already called a new special session. As a rallying point for abortion rights supporters, the incident has catapulted Wendy Davis into the national spotlight, and spawned talk of a run for the governorship.

Davis’ filibuster, and the attention surrounding it, have also resulted in strong backlash, but none quite as strong as Zedler’s “terrorist” barb. He followed up his tweet by drawing a slightly less incendiary comparison. “Disruptive behavior of pro-abortion crowd was encouraged by some Texas House Democrats.”