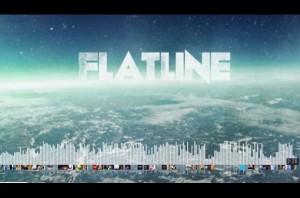 What the hell is going on with rapper B.o.B these days? As we reported yesterday, the Atlanta-born hip-hop artist, who has been nominated for six Grammy Awards, is undeniably an Earth-is-Flat truther. Alongside posts to promote his newest album and concert dates, B.o.B’s social media pages have been clogged up recently with bizarre claims about the Earth being flat with the “science” to back it up.

The cities in the background are approx. 16miles apart… where is the curve ? please explain this pic.twitter.com/YCJVBdOWX7

@bobatl Earth’s curve indeed blocks 150 (not 170) ft of Manhattan. But most buildings in midtown are waaay taller than that.

And as if the weirdest new beef in rap wasn’t strange enough, B.o.B has released a new track: the appropriately named “Flatline”.

You can listen to the track via SoundCloud above. The track, for good measure, “features” Neil deGrasse Tyson spouting off some of his usual science brilliance, to which B.o.B offers the simple retort: “You fooled us for the last time.”

Oh, and for casual good measure, “Flatline” also features B.o.B’s take on the Holocaust more or less, encouraging his readers to “read more David Irving.” Irving is one of the world’s foremost vocal leaders of the Holocaust-denier movement, so the conspiracy train now runs express between the Irving-B.o.B stations.