The Case for Progressive-Libertarian Cooperation

The Case for Progressive-Libertarian Cooperation 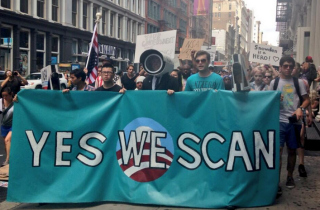 This week, Salon published a piece warning anti-NSA progressives to be wary of libertarians, bafflingly describing the ideology as “unfreedom of the majority” and “hard-right” support for “survival of the fittest.” Such mischaracterizations cannot go without response, especially when the author took aim at several libertarian groups like Students for Liberty (SFL) that have been active in pursuing a freer, more open society. Below is a rebuttal from SFL’s Vice President Clark Ruper. – Andrew Kirell, Sr. Editor, Mediaite

This Saturday, October 26, privacy advocates from across the country will gather in Washington, DC for a Rally Against Mass Surveillance. The event is supported by a coalition of organizations from across the political spectrum which have united to defend our civil liberties. The official petition calls for “Congress to take immediate action to halt this surveillance and provide a full public accounting of the NSA’s and the FBI’s data collection programs.”

Students For Liberty, an international network of libertarian student groups, is proud to be a part of this coalition on such a critical issue.

However, a recent Salon article by Tom Watson argues that libertarians ought not be allowed into this coalition because we are not progressives. While it is true that libertarians aren’t progressives, Watson does not provide a convincing argument for why that should prevent our working together. Libertarians and progressives share many core values, including tolerance, fairness, respect for human rights, and privacy, to name a few. We both envision a world of opportunity and justice, free from the abuses of power which have become far too common in the modern age.

What Watson fails to realize is that libertarianism is not a philosophy of the right or left. We are actually a radically centrist coalition ourselves. Not beholden to any political party, from the center we can hold both sides accountable for their abuse of power. The past thirteen years of the Bush and Obama administrations have offered plenty of that to go around. Libertarians have been out in front on privacy issues, criticizing the Patriot Act from the beginning and pushing for reform ever since. It is naive to think that working with one party will bring justice on the issue of privacy, especially as left-wing politicians such as Diane Feinstein are leading the defense of the NSA surveillance state.

Our argument for progressive-libertarian cooperation is not idle musing but based on the recent history of successful movements and coalitions. Take two notable examples of the anti-war movement and the fight against the drug war.

The anti-war movement of the 1960s and early 70s was not a monolithic ideological enterprise but a broad coalition in which libertarians played a strong role. Students For Democratic Society, the leading student organizers of the coalition, featured strong libertarian influences and membership. SDS President Carl Oglesby openly identified as a libertarian and recalled his arguments for a broad coalition in his memoir Ravens in the Storm, “Libertarianism is a stance that allows one to speak to the right as well as the left, which is what I was always trying to do . . . Why go to rightists on this theme when there were so many leftists to choose from? Because you made the strongest case against the war if you could show that both right and left oppose it.” Because of the anti-war movement’s broad nature it was able to galvanize a generation of young people and roll back our nation’s deplorable wars of empire.

Today young libertarians are leading the charge against expanding the wars and the increasingly prevalent use of drones. Leading progressives like Glenn Greenwald recognize this, having worked with libertarian student groups across the country to bring attention to these issues.

Another prime example is the movement to end drug prohibition, an area where we are making tangible headway to end one of the most harmful and ineffective social policies of the past century. Each spring Students For Liberty groups partner with organizations such as Students for Sensible Drug policy to raise awareness of the harms and injustice of the drug war. Libertarian activists and politicians were on the ground working feverishly for the recent legalization initiatives in Washington and Colorado. Together, all advocates of individual autonomy and social justice are making progress towards ending these racist and discriminatory policies.

On these issues and many more, our government is doing real harm right now. These policies destroy communities and erode our civil liberties. All proponents of freedom and justice must put aside our ideological differences and speak out. We have to marshal support from all sides of the political spectrum to show that the American people will not stand for this abuse. Students For Liberty is proud to be a part of Stop Watching Us coalition. Media outlets like Salon are unfortunately disconnected from activism on the ground that is critical to keep pressure on politicians to reform these flawed policies. We hope that progressives, conservatives, moderates, and anyone with respect for privacy and civil liberties will join with us. Together, and only together, can we make a difference.

— —
Clark Ruper is the Vice President of Students For Liberty International, a network of over 900 pro-liberty student groups from around the world.