The Fall Of Trump? New Poll Reveals His Numbers Have Dramatically Dropped 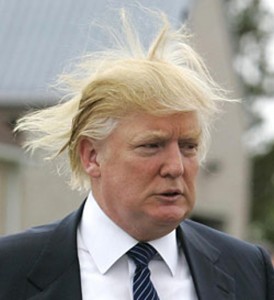 Donald Trump may have, for a time, captivated Republican voters to the point where many favored him as the front-runner among potential GOP presidential candidates. In late April, for instance, the businessman and reality television host led a Rasmussen poll of GOP primary voters, and, earlier that month, Public Policy Polling revealed that Trump led the entire GOP field by nine points.

At the time, Trump told radio host Rush Limbaugh that his popularity was simply the result of people responding to his “message” – specifically, the message that President Barack Obama may or may not have been born in the United States and, thus, owes it to the American people to prove his citizenship by releasing a copy of his long-form birth certificate. Daily Show host Jon Stewart called the early fervor over Trump “premature ejaculation,” while many big names within the Republican party – from “old school” Republicans like Karl Rove to the party’s “new blood,” like Rand Paul, and even conservative pundits like like Ann Coulter and Glenn Beck – all, at one time or another, expressed concern and frustration over Trump’s insistence on repeatedly trotting out the “birther” issue and, indeed, making it the cornerstone of what may or may not have been either a toe-dip into a formal campaign, a calculated effort to draw attention to his television show, or some combination thereof.

But it would now appear that Trump’s meteoric rise to the tops of these polls and the media frenzy that came along with it may end up being footnotes in his biography (Too Trump To Trump: A Portrait Of Donald Trump, with a foreword by Donald Trump. Illustrations by Trump, Donald). Today, Public Policy Polling revealed that his popularity has dropped both quickly and dramatically:

Donald Trump has had one of the quickest rises and falls in the history of Presidential politics. Last month we found him leading the Republican field with 26%. In the space of just four weeks he’s dropped all the way down to 8%, putting him in a tie for fifth place with Ron Paul.

Mike Huckabee and Mitt Romney are at the top of the GOP race with 19% and 18% respectively. Newt Gingrich and Sarah Palin are further back at 13% and 12%, followed by Trump and Paul at 8%, Michele Bachmann at 7%, and Tim Pawlenty at 5%.

As Trump got more and more exposure over the last month Republicans didn’t just decide they weren’t interested in having him as their nominee- they also decided they flat don’t like him. Only 34% of GOP voters now have a favorable opinion of Trump to 53% who view him in a negative light.

Conservative blog Hot Air does, however, offer to place the results in some sort of perspective:

This is PPP, of course, a pollster that identifies itself as “a Democratic polling company,” but this is a survey of Republican voters alone, so sampling won’t be as much of an issue. If this is accurate, Trump would do better to invest in his television series rather than a vanity campaign for President — and he’s probably smart enough to know it.

Either way you slice it, the takeaway here seems to be that Trump is a masterful marketing professional, who knows how to get attention and inspire headlines. Whether he also knows when to stop, when to bow out when people find themselves saturated by any given name or brand or idea, is yet to be seen.

Now. Won’t someone please reach out and make sure Lawrence O’Donnell didn’t strain something while clapping enthusiastically?