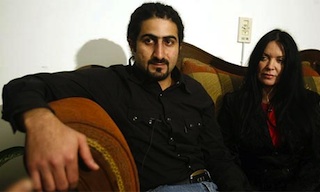 The New York Times has released parts of a statement from the adult sons of Osama bin Laden condemning the American mission that ended their father’s death. The statement was sent to the paper by Jean Sasson, an American who helped Omar bin Laden, one of the sons, write the memoir Growing Up bin Laden in 2009. In that book, the son described his eventual rejection of his father’s violent tactics. As such, he and his brothers (the statement apparently does not specify which of the terrorist’s children contributed) say they must also reject the American government’s violent retaliation.

“’We want to remind the world that Omar bin Laden, the fourth-born son of our father, always disagreed with our father regarding any violence and always sent messages to our father, that he must change his ways and that no civilians should be attacked under any circumstances,’ the statement said. ‘Despite the difficulty of publicly disagreeing with our father, he never hesitated to condemn any violent attacks made by anyone, and expressed sorrow for the victims of any and all attacks.’

Condemning the shooting of one of the Qaeda leader’s wives during the assault on May 2 in Abbottabad, Pakistan, the statement added: ‘As he condemned our father, we now condemn the president of the United States for ordering the execution of unarmed men and women.’”

The statement points to the arrests and trials of Saddam Hussein and Slobodan Milosevic as examples of how Bin Laden should have been handled saying that “international law has been blatantly violated.”

This marks the most recent in a series of people questioning whether the assassination of Bin Laden contradicts are seeming positions on justice. It will be interesting to see if the sons’ obvious connection to the story gives their opinion more or less merit than, say, Rosie O’Donnell.

Read the full Times description here. The above photo is of Omar bin Laden and his wife Zaina al Sabah bin Laden and is from Reuters.