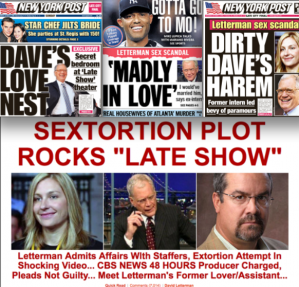 Based on the coverage David Letterman‘s alleged love life is getting these days you’d be forgiven for concluding that Letterman wasn’t the victim of a $2 million extortion plot — which he chose to reveal himself, to both the police and a national television audience — but the subject of an undercover investigation or sexual harassment lawsuit. In the past three days the tabloids have done a fairly successful job painting the late night host as a lecherous, randy comic who preys on innocent staffers. Today we find out he keeps a a fold-out couch and a kitchen in his office! Oh the humanity.

Let’s just take it back a step, shall we? Here’s a few things to perhaps keep in mind amidst all this ‘sextortion’. One, Letterman didn’t actually get married until last March. Two, and this is arguably the most important point, thus far not one of the women staffers allegedly involved with him have stepped forward now, or at any point in the past, to suggest that they were in any shape or form harassed. In fact, according to the NYT “CBS executives did quietly seek and receive assurances that none of the women Mr. Letterman was talking about were under age and that no woman who was involved with him had felt threatened about her job.” This fact alone would strongly suggest that what we actually seem to talking about here, in terms of Dave’s alleged love life, is simply case of consensual sex between a powerful man and the women who worked around him. Wow right? A jaw dropper. Of course, you’d have to dig through some pretty blaring headlines to reach that conclusion.

Why is Stephanie Birkitt bearing the brunt of all this shock and awe?