The Power Of A Link: How Mere Mention By Drudge Can Send A Stock Price Tumbling 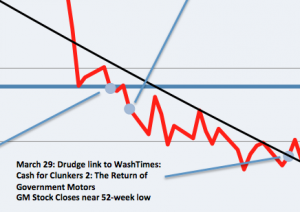 Coincidence? Maybe. But there’s no denying the stories Matt Drudge puts on his Drudge Report get plenty of attention. For bloggers and media types, a Drudge link feels like winning the lottery–suddenly the world’s at your door, eagerly consuming your content. But what if the content in that Drudge link is bad news about your business? Well, that’s a lot of eyeballs reading something you’d rather see buried. Instead, the Drudge link can grab hold of your stock price and sink it six feet under.

Take, for instance, General Motors. After a seemingly successful IPO last fall, things have tanked. In recent weeks, GM’s stock price has been–in the words of CBS MoneyWatch columnist Conrad de Aenlle “in a tailspin.” As de Aenlle pointed out on March 7:

After being offered for sale at $33 a share last November after GM emerged from bankruptcy reorganization, the stock climbed as high as $39.48 in January and has headed downhill ever since. It reached a new low of $32.01 on Friday, below the issue price.

And since then, the stock’s dropped even further, hitting $30.65 before the market’s close Thursday.

The execs at GM have a lot to think about, but they might want to cross their fingers, light a candle and hope Matt Drudge forgets their company exists. Why? GM’s ended up on the Drudge Report at least seven times since the IPO. And no, they weren’t good news. Take this Drudge headline from March 4: SHOCK REPORT: GM sells just 281 Chevy Volts in February, or this one on April 1: Government losses in GM far higher than claimed.

Every time Drudge links to a lousy story–like the April 10 story in The Wall Street Journal about a Chevy that lost its steering wheel–the carmaker’s stock falls faster down the edge of the mountain: 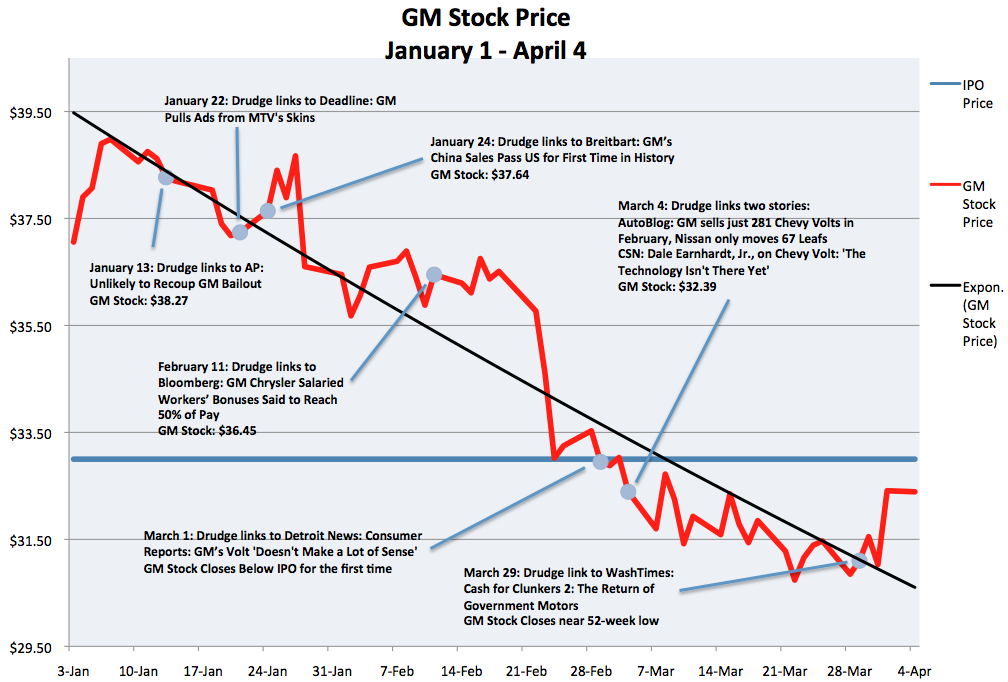 So the lesson’s clear–at least for auto makers–make sure your steering wheels stay on tight, and try to get ignored by The Drudge Report.