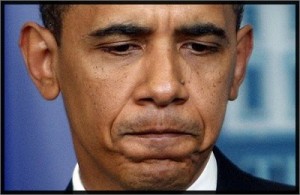 According to a new Gallup poll released today, President Obama‘s approval rating has returned to a 41% approval ratings, the lowest level at which he’s ever polled, the last time coming around November of of 2010 around the mid-term elections. Perhaps most concerning to the White House reelection efforts is that his approval rating is down most among likely independent voters, with 35% of independents approving of the job Obama has done, nine points lower than where that figure has been earlier in the year.

The current 41% approval rating from April 12-14 polling includes interviews conducted before and after Obama announced his plan for deficit reduction on Wednesday. It also comes in the same week Congress is voting on the 2011 budget deal reached last Friday. The deal did not seem to have an immediate effect on the way Americans viewed Obama, given his 44% approval rating in the three days prior to the agreement and his 46% rating in the initial days after the agreement.

The economy is likely also a factor in Obama’s declining ratings. Though unemployment is improving according to government estimates, the economic recovery remains slow and is being challenged by rising fuel prices. Presidents’ approval ratings have historically suffered in times of high gas prices.

The current three-day average finds 50% of Americans disapproving of Obama, two percentage points below his high disapproval rating of 52% from Aug. 15-17 and Aug. 16-18, 2010, polling.

Obama’s approval rating has averaged 48% thus far in 2011, including a slightly higher 50% average during the last two weeks in January.

Read the entire write up at Gallup.com.