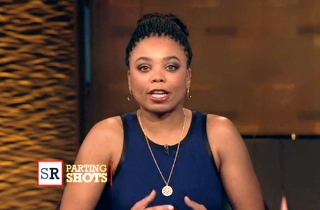 Hypocrisy and the right go together like Batman and Robin, like Bonnie and Clyde, like Lady and the Tramp. In fact, the right should trademark the word “hypocrisy” so they can charge us for using it to describe their actions- they would be rich in weeks.

The latest hypocritical display by the right comes over freedom of expression. Yes, the same people who claim the left is waging a war on freedom of expression are clamoring for ESPN anchor Jemele Hill to be fired simply for criticizing Donald Trump.  And even more alarming was the jaw dropping words of Trump’s press secretary Sarah Huckabee Sanders yesterday when she in essence called for ESPN to fire Hill, saying that Hill calling Trump a “white supremacist” is a “fireable offense.”

Just to be clear, Trump’s actions are a master class in white supremacy-From calling white supremacists “fine people” after Charlottesville, to refusing to denounce David Duke until shamed by the media, to pardoning the racist Joe Arpaio who openly racially profiled Latinos, to ending DACA, to his Muslim ban, refusing to rent to African Americans, to his birther campaign, his claim that President Obama did not write he own memories but a white man must have  and the list goes on and on.  There’s a reason so many white supremacists openly cheer for Trump-and it’s not because his clothing line is made in China.

But if you disagree with my view, then so be it. This is America-we must vigilantly protect a free exchange of political ideas. That is why I have publicly defended Ben Shapiro speaking at UC Berkeley even though he has demonized Muslims (I’m Muslim) with baseless claims, as Politifact has noted,  that have ginned up fears of my community – but that is the price of freedom of expression. Of course, despite my vocal defense of the right’s freedom of expression –  as I noted in my Daily Beast article yesterday- conservatives have still not defended my right to speak at the conservative Liberty University. (I’m offering to speak there for free to build bridges.) But we can just chalk that up as another episode in the right-wing soap opera known as “Hypocrisy.”

The right’s reaction to Jemele Hill proves to all with eyes and ears that they want to silence any speaker they don’t agree with.  We saw that stated point blank on Twitter by countless people with #MAGA in their profile and their use of the hashtag #fireJemeleHil.  A tiny sample include tweets like:

Another self-professed Trumper who has the Twitter handle “#Buildthewall” tweeted

Let’s blow up the telephone lines about the vile racism on the part of @espn and @jemelehill ? (888)549-3776 ? #fireJemeleHill @ESPNPR RT pic.twitter.com/cNrtm0f6yG

Then there was Fox News. This morning on “Fox and [White] Friends” they featured a former ESPN commentator who noted that he he had to curtail his political views when he was on ESPN so why isn’t Jemele Harris’s freedom of speech also being infringed.

.@jasonsehorn: I was asked to curtail political statements while at ESPN, why isn’t Jemele Hill held to the same rules pic.twitter.com/bAbHr2xDr0

Others on Fox News also took shots at ESPN for not firing Hill, including the never insightful Tomi Lahren.  Last night Lahren made it clear she supported the stifling of political dissent by declaring that Trump supporters will now be “turning off the TV. That’s how we’re going to voice our opinion and use our freedom of expression.”

If Trumpers want to stop watching ESPN to pressure the network to silence criticism of their beloved Trump, that too is an exercise of freedom of expression. But please Trumpers don’t whine in the future that people on the left are objecting to racist or bigoted speakers. Deal?

But the most stunning part of all of this is how Sarah Huckabee Sanders stated from the White House briefing room that Harris’s words criticizing Trump were a “fireable offense.” I can’t even imagine the freak out by right we would’ve seen if Obama’s spokesperson had called for a person to be fired for criticizing Obama.

None of this will change the victimhood mentality of the right or its hypocrisy. But next time you hear the right complain about freedom of expression, remember that they wanted a person fired for criticizing Trump and were silent when the Trump administration called for that person to be fired. That is truly who they are and what they are about.