The Things We Do For Love. Game of Thrones Recap: Season 6, Episode 8: ‘No One’ 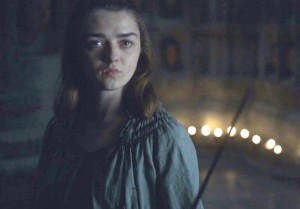 Spoilers for Game of Thrones Season 6, Episode 8: “No One”

“A girl is Arya Stark of Winterfell, and I’m going home,” Arya tells Jaqen before finally walking out of the House of Black and White and quitting the world’s worst unpaid internship. Despite their unique abilities and arcane, pontifical ethos, the Faceless Men are ultimately mere tools, servants of the Many-Faced God, and hired hands for the clients who pay for their services. Arya is none of these things. Like every major character in the show, she is motivated by an agenda that does not allow herself to be converted into someone else’s instrument.

It doesn’t matter if you’re a band of dispossessed zealots like the Sparrows or the Brotherhood Without Banners, a lifelong warrior like Jaime or Brienne, or a child of privilege belatedly locating your backbone like Sansa or Tyrion. Everyone is animated by something larger than themselves: belief in several or singular gods, fealty to a lord or lady, or the desire to protect and avenge your family.

The only thing that matters is: Do you have the power to make that “something larger” will itself on the world? Anonymity can be a comfort, but it’s also a liability. If you’re truly “no one,” chances are there’s a “someone” out there prepared to enlist you to kill and be killed for reasons that ultimately mean nothing to you.

“All of us have to believe that we’re decent, don’t we?” a captive Edmure Tully asks Jaime. And the answer is, no, not really. As we learned last week when Brother Ray and his humble little band of sept-builders got themselves massacred, decency for decency’s sake is basically a death sentence.

“You don’t matter to me, Lord Edmure,” Jaime says calmly. “Your son doesn’t matter do me. The people in the castle don’t matter to me. Only Cercei. And if I have to slaughter every Tully who ever lived to get back to her, that’s what I’ll do.”

“Decency,” it seems, is narrowly drawn within the confines of one’s family, or religion, or particular desires. And so to answer your impudent question, Lord Edmure, “How do you sleep at night?” You do it, knowing that you did whatever it took for you and yours. Which is how Edmure finds himself ordering Riverrun to surrender to the Lannisters, selling his kinsman the Blackfish up the river.

A somewhat reformed Sandor Clegane articulated the central theme of “No One,” when he told Thoros of Myr, “Lots of horrible shit in this world gets done for something larger than ourselves.”

Or as Jaime glosses it, “The things we do for love,” recalling the last thing he said before pushing Brandon Stark out of a tower to close out the show’s premiere episode — merely the first instance of “horrible shit” going down in Game of Thrones because “something larger” came up.

People do unspeakable things in the name of family, loved ones, ancestral homes, old grudges, blood oaths, lost causes, even something as nebulous as “the greater good” or ominous as “the winds in the North.” Westeros is teeming with multitudes of lowborn folk who would not, as Jaime puts it, like to “die for someone else’s home.” But they’re, in effect, “no ones.” So die they do, by the thousand and the ten-thousand, in long, costly, bloody, brutal wars that traced to their root causes almost always began with the things that higher-born people did “for love.”

Arya made the right call. It’s better to be “someone.”

And then there’s Brienne and Jaime, whose touching reunion and subsequent silent, somber parting, formed a kind of counterpoint to the pitiless machinations with Edmure. If his conversation with Lord Tully evoked all the horrible things about Jaime — namely, his ruthless, murderous devotion to his sister — his scenes with Brienne remind us that she is the only person who truly understands that there’s some irreducible crumb of selflessness and honor underneath all that gold and swagger. She watched him break ranks with his family to rescue her from a bear, and she alone knows that he broke his oath to protect the king in order to save a city. (Asked how many people’s lives he had rescued, Jaime once told Qyburn: “Half a million, the population of Kings Landing.”)

And yet — according to a tangled lattice of house loyalties — if it comes to it, these two will be honor-bound to fight each other. It’s a fight I expect we will see on the show someday soon, but apparently not today.

Meanwhile, the Hound was enjoying a reunion with Thoros of Myr and Beric Dondarrion that was far more amicable than their last encounter in season 3. After breaking bread and tag-teaming some executions with them, the three got down to the portentous business of destiny and those disquieting rumblings coming from north of the wall. Should the Hound decide to join the BwB and fight in the Lord of Light’s ragtag army against the Walkers, he would probably prove a potent ally, Valyrian sword or no.

Meanwhile, in the nation’s capital, they have no time for dire existential threats posed by the looming winter and the Night King; petty power plays are still the order of the day in Kings Landing.

Despite being king, Tommen has been a puppet his entire adult life. His own libido made him putty in Margery’s hands, his ignorance of governmental affairs made him briefly Tywin’s pawn, and — like all the Lannisters — Cercei has exercised a formidable pull over him. And now, drunk on the platitudes of the His Holiness the High Septon (awfully puffed-up moniker for such a conspicuously humble fellow) and possessed with a righteous purpose he has never known in his life, Tommen has all but sealed his mother’s fate, by outlawing trial by combat and taking her personal Terminator, the reanimated Gregor Clegane, out of play.

Between the Hound’s rendezvous with the BwB and the Sparrows’ feint diffusing the Mountain, it does seem unlikely we’re going to get the CleganeBowl resolution to Cercei’s legal trouble

Of course that wasn’t the only theory that had some water splashed on it this week. Some of the trippier Fight Club-inspired notions about Arya and the Waif came to a bloody, satisfying fizzle when Arya dropped her nameless tormenter’s face on the wall. For all the rapaciously speculative mind-bending fan theories out there, Thrones tends to deliver fairly straightforward results that play according to conventional rules of drama. (See, for example, Jon’s resurrection occurring in pretty much the most expected manner possible.)

So if a girl (Arya) and a girl (Waif) face off in Episode 1, expect a dramatic showdown in Episode 8. Their chase through Braavosi back alleys, a marketplace, and a sauna was an elegantly staged and suavely executed sequence.  And perhaps a tip of the hat is finally owed to the tremendous physical performances Maisie Williams and Faye Marsay (who portrayed the Waif) who spent much of Season 6 beating each other up. Offhand I can’t think of any other actors in the show, for whom the majority of their time onscreen seems to be primarily eaten up by endless, brutal fight choreography.

Of course, Daenarys made a triumphant return to Meereen, borne on the back of Drogon (who can breathe fire, sure, but his real magic power seems to be a capacity for making dramatic entrances). It looks like she’s about to leave Essos smoldering in dragon breath and get to the long-postponed business of sacking Westeros, but the Seven Kingdoms might not even last long enough to be destroyed by fire.

With a craven Tommen delivering his country into the hands of regressive fanatics, and three distinct civil wars playing themselves out in three separate kingdoms, it seems like the nation may be well on its way to rotting away into chaos and deprivation all on its own. Recall that the Crown is “half a kingdom in debt” to the Lannisters, themselves in arrears to the Iron Bank in Braavos. Economic turmoil and theocratic fascism maybe aren’t as exciting as ice-zombies or dragons, but if you want to ruin a country, they will get the job done.

As an episode like “No One” plainly illustrates, the most destructive forces in this show don’t come from foreign shores, they come from within.

Qyburn seems to have located Tyrion, but I think Cercei has bigger fish to fry than her fratricidal brother on the other side of the world. Then again, she has a way of getting out of even the tightest corners and no matter how busy she is, she always seems to be able to devote time and resources to plotting Tyrion’s death.

The next episode, entitled “Battle of the Bastards,” will see Jon Snow and the Free Folk facing off against Ramsay Bolton. So far, the penultimate episode of every even-numbered season has been entirely focussed on a single large-scale battle. See Season 2’s “Blackwater” and Season 4’s “The Watchers on the Wall.” If the show sticks to tradition, we could expect another episode-long skirmish, which would mean only one episode remaining, the finale, to resolve the show’s other threads: Sam and Gilly, Brandon and Meera, Varys’ secret mission, the resurgence of the slavers, Theon and Yara, that Dorne nonsense, and, uh maybe, Jon’s parents?

Tyrion’s joke, cut short by the maritime invasion of the masters, begins: “I once walked into a brothel with a honeycomb and a jackass.” I really hope we get to hear the end of that one.