No, I Don’t Really Think We Should Ban Muslims Or Gun Owners
Opinion

No, I Don’t Really Think We Should Ban Muslims Or Gun Owners 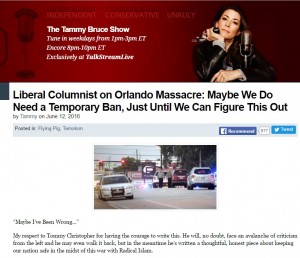 On Sunday, I published a piece of commentary that got intense reactions from all over the political spectrum, as it was intended to. Entitled “Maybe We Do Need a Temporary Ban, Just Until We Can Figure This Out,” the piece was carefully constructed to be read in a number of different ways, but with a clear misdirection to support for Donald Trump’s proposed ban on Muslims. The text referred repeatedly to “these people,” but studiously avoided identifying these people by name, allowing the reader to fill in the blank. There were also links in the commentary, however, that gave unambiguous clues as to “these people’s” identity: gun owners.

My original purpose was relatively simple. For those who “got” the piece, it served to illustrate the absurd asymmetry between our reactions to Radical Islamic Terrorism™ versus the plague of gun violence in this country. In the history of Radical Islamic Terrorism, around 4,000 Americans have been killed worldwide, which is what firearms deaths would call a good couple of months. Yet a majority of Americans support Donald Trump’s ban on Muslims, and a plurality support patrolling Muslim neighborhoods. What do you think the support would look like if Muslim terrorists killed 30,000 Americans a year?

Meanwhile, even the most meager efforts at gun control have failed in the wake of tragedy after tragedy, and the individual right to firearms ownership is not remotely in question. Rather than lead readers to a conclusion, I hoped to provoke thought about the ways in which we treat these two constitutionally covered freedoms.

It was also my hope that some people wouldn’t “get it,” although to be honest, I thought I had made it too obvious. At first glance, readers who were predisposed to hoping that a liberal could instantly be turned racist by a terrorist attack would assume the piece referred to Muslims, and chime in with some form of agreement, they way Tammy Bruce did:

My respect to Tommy Christopher for having the courage to write this. He will, no doubt, face an avalanche of criticism from the left and he may even walk it back, but in the meantime he’s written a thoughtful, honest piece about keeping our nation safe in the midst of this war with Radical Islam

While the main point of this was, admittedly, subversion and provocation, my hope was that people who didn’t “get it” would then think even harder about it once it was inevitably explained to them. I assumed these would mostly be pro-gun conservatives, and that they would see how little reassurance gun owners would derive if a campaign against “Radical Gun Ownership” were to take root. Would they feel as strongly that the phrase doesn’t paint an entire group with a single brush based on the extreme views of a minority? Embedded within that construction were other pieces of commentary, such as the fact that while Muslim leaders routinely denounce Islamic extremism, the leaders of the gun rights movement espouse much more radical views than their rank and file. They tell their members that locking their guns up will get their children murdered, for crying out loud.

As it turned out, though, the piece fooled a broad swath of people, even friends and colleagues I’ve known for years. Suddenly, my Twitter timeline was filled with tweets from liberals and others who, despite the poorly-masked twist and copious links, believed that I had turned racist on a dime:

Good, god. The shooter was born in America. You want to ban people born here? https://t.co/lAR1L2fOUk

@Mediaite @tommyxtopher He wasn’t a refugee or an immigrant, are you planning on rescinding American Muslim citizenship?

.@Mediaite Seems you no longer have a liberal columnist after @tommyxtopher wrote this: https://t.co/kzlDzilOlK

Im free if you need one.

Disgusting to see @tommyxtopher supporting Trump’s ban on “these people.” You should be fucking ashamed of yourself. https://t.co/Rq9CteQXsf

.@armandodkos enough to deal with without watching allies like @tommyxtopher totally lose their shit in public

Glad to see this tragedy bringing out the best in everyone today https://t.co/GyGgnk7X62

There were also plenty of people who did get it, but there wasn’t really any rhyme or reason to the split. Lots of people were still angry when they figured it out, and still others frantically contacted me offline to insist that I include some sort of explicit direction in the piece. They offered good reasons to do so, but I resisted that urge because the reactions to the piece are perhaps the most important thing about it, the unwritten closing paragraph. The challenges it presents to the reader, and to the author, outweigh the need for comfort in my view.

The fact that so many people were willing to believe something that clearly wasn’t written there is a bit of a mystery, but I think it might reveal an anxiety among non-conservatives about the appeal of Donald Trump’s message, especially in the wake of tragedy. They’re right to be anxious about that, but I also wonder how much of that anxiety is a product of Trump’s message tugging at their own reptilian fear centers.

What’s depressing is I doubt there is any corresponding anxiety from the pro-gun crowd about messages like Hillary Clinton’s or Barack Obama’s. There are many reasons for that asymmetry, but one that I think is overrated, and which Trump’s Muslim ban illustrates, is the weakness of the political gun control movement’s opening bid. If all you ask for is the bare minimum, you end up meeting in the middle at nothing. I don’t think we should ban gun ownership, but you can bet that if there were serious calls to do that, background checks and assault weapons bans would sound a whole lot better than they do now.