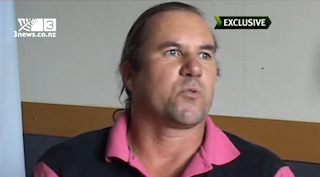 For proof, check out the awful ordeal that befell New Zealand truck driver Steven McCormack. McCormack fell and broke a compressed air hose for his truck’s brakes and part of it, in the Associated Press’ words, “pierced his left buttock.” The hose then began to fill his body up with air.

“‘I felt the air rush into my body and I felt like it was going to explode from my foot,’ he told local media from his hospital bed in the town of Whakatane, on North Island’s east coast.

I think the worst thing to happen to someone is to die in a way that is both horribly, horribly painful and also ridiculous sounding. Fortunately, McCormack was spared this indignity as other workers from the same trucking company ran over to save him. He was rushed to the hospital was doctors revealed that the air had “separated [his] fat from muscle” but, fortunately, not gotten into his blood. He’s healing now.

Well, now that I know that people can actually be injured the way they are in cartoons, I’ve decided to buy my lunch instead of trying to catch it. I’m sure hanging this anvil over this desert highway would work perfectly but it’s probably best to err on the side of caution.

Watch a video interview with McCormack from New Zealand’s TV3 News (which also includes a fairly disturbing computer generated recreation of what the inside of his body looked like) below: